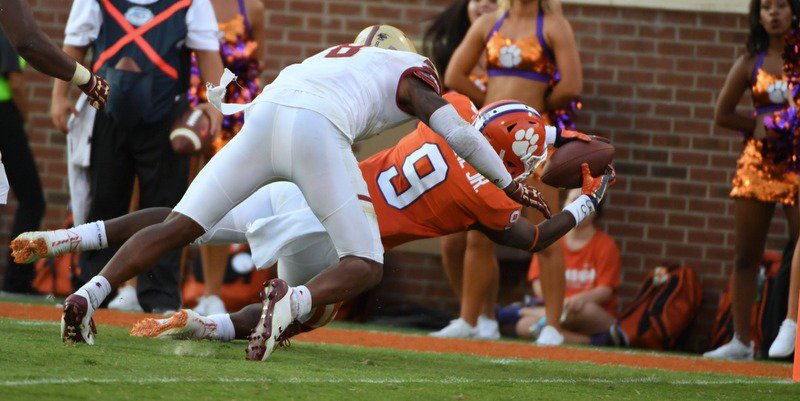 A win is a win, I know that is so cliché, but it certainly applies here. In a very tough environment, we battled to the last and came out with a win – good programs usually win games like that.

No doubt – we’ve got lots of work to do, but doesn’t everybody (sans Alabama)? Also, SO VERY PROUD of KB !! He could have gotten down on himself for not getting enough playing time, but he didn’t – great example to all young athletes out there everywhere. We would not have won that game without him.

The only question I have is: why did we not run the ball more ? Were they loading the box to stop that ? Even if they were, shouldn’t we have tried to run anyway….at least more than we did ?

Dabo has said he wants to get the running backs 35-40 carries a game, but through two games they are averaging 18.5 carries per game. That is a huge gap. One of the issues in College Station is the Tigers were in second and long too often. The other issue is the RPOs have resulted in more passes because that is what the defense dictated.

The good news is this staff fixes things. I think you will see more running back carries starting this week. This off-season the offensive staff and Dabo said they wanted to improve the vertical passing game? They fixed that. Now let’s see if the running backs get more carries this week.

Thanks for all you do. I look forward to reading your email responses every week and appreciate your insight.

Just some of my closing thoughts on A&M, I thought they played great, and had a great game plan - offensively and defensively. Fisher, of course, knows us, knows our personnel, and knows how to find ways to score on us. That said, I thought we had a great plan defensively, with some poor execution and a fair amount of luck the other way, with just enough going our own way to help us hold on to the W.

I am curious about your thoughts regarding the offensive game plan. I was personally a little disappointed, because it looked more of the same when Kelly was in there. Kelly played as well in the second half as I've seen him play, but the play calling is very much the same as last year. Too many lateral screens and predictable running plays, with our playmakers not getting enough touches. However, as good as Trevor looked at times, I believe Elko sent 3 straight corner blitzes in the 3rd quarter that he never picked up, and I thought that was the difference late in the game, was Kelly being able to adjust his protections and COMMAND the offense instead of just RUN the offense. I would love to know what you think about both the offensive game plan and those differences in the quarterbacks.

Finally, I think both QB's will continue to play, and play well, going forward. I think the issues TL had will not be issues going forward as he will learn from them and just continue to get better. And how many different corner blitzes do you think he sees in practice this week? LOL.

A&M set the edge well and played better than Clemson up front. If you are getting whipped up front, I am not sure what running plays to call. Also, the down and distance had a Clemson facing tough choices most f the night.

I thought both QBs played OK, but both had some down moments. The offense sputtered with negative plays like the losses in the screen game and the bad snap.

The offense did hit four big plays in the passing game. Higgins, Rodgers, and Renfrow had big catches. Overton’s touchdown was a great throw and catch. Etienne had some terrific runs. Bryant had two excellent runs as well.

I think we will see more efficiency on offense and better play calling this week. I think the offense will start to find an identity this week.

I watch the games like everyone else, and sometimes think they should do this or that. I see the comments on Tigernet; “too many bubble screens”, “we all know Bryant will run it a lot at the end of the game, so does opposing coach” “why not a few screen passes to Etienne in space?” “Bryant can or can't do this or that..” I would encourage all Clemson fans to settle down and think for a minute. Remember the 90s? Hatfield, Tommy West, even Tommy Bowden. Our trustees took a chance on an unknown WR coach named “that boy” in baby talk - and stuck with him! Remember the second full year? it wasn’t pretty. Look around at the current college landscape. If you could change our coaching staff, where would you make a change? That’s what I thought. What luck we have had, its pretty unbelievable!! What program has a staff like ours? Winning at the highest level AND running it clean AND with a colorful fun coach AND with a coach that any of us would be proud to invite over for a burger AND a coach that loves Clemson AND… Sometimes when I get wound up at the end of a game when I see us go in hyper conservation mode, I need to remind myself that this is as good as I will see Clemson in my lifetime. Period. WE ARE GOING TO RUN BUBBLE SCREENS AND RUN THE QB AT THE END OF GAMES. It's just what it is. Sometimes I think our fan base, especially the younger ones without the experience of being in death valley and getting beat by mediocre teams, just can't appreciate where we are right now. Its like we have won the lottery and some (not a lot but seems to be increasing) still aren’t 100% happy. I would encourage you to open a beer and soak it all in my friends! Some young fans (not all) and students are like the lottery winner’s kids. So spoiled they don’t even know what a 1st world problem is. Dabo won’t be around forever. At this point, I am putting my hands up, and supporting them no matter what. I hope he lives to be 100 and is coaching than from a gold covered wheelchair in a luxury box! I don’t care what plays they run and with whatever personnel. I-formation and a cloud of dust? Go for it! I have a tiny fraction of the information and am not qualified to even comment intelligently. Our coaches live football every day. I would encourage folks to chill out a little with the critiques, take a step back and look at the big picture, and realize it doesn’t get any better than this. Let's keep it real, and fun! I know most fans are solid supporters, but get the feeling a few need to get off their high horse and check in with reality. Cheers to Dabo, all coaches, and anyone associated with the running of our program – I salute you all for doing such a magnificent job!!

Thanks for the thoughtful email. I agree with you 100%. I don’t mind a little bit of fair criticism, but this staff just wins. The down years hurt and I hope we do go back there any time soon. I appreciate every win more now. This staff isn’t perfect. This program isn’t perfect. But they are doing it at the highest level we have ever seen. Thanks for the perspective. I think we all could utilize your advice.