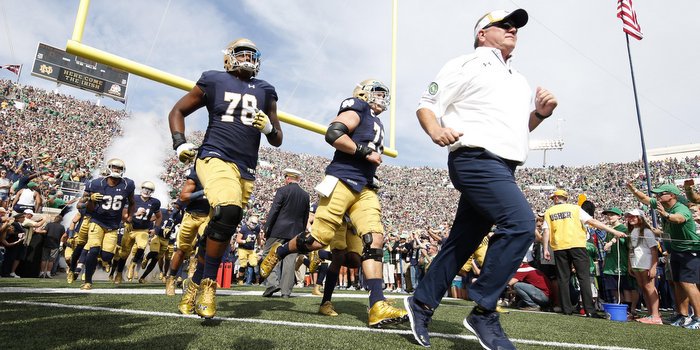 Yesterday we focused on Notre Dame's offense, today we will preview the defensive side of the ball for the Fighting Irish.

The Irish are 40th in the country in total defense allowing 341 yards per game. They are 44th in rushing giving up 137 yards a game on the ground and 52nd in pass defense allowing 203 yards per contest. Notre Dame has allowed 19.8 points per game in the first four contests this season.

Dabo Swinney
Head Coach
View Full Profile said, "Defensively they are aggressive, they force the issue, they're physical up front, they're big and thick inside, their backers can run. They're athletic and fast in the secondary. It's a veteran secondary. They're very similar to us defensively."

The best player for defensive coordinator Brian Van Gorder's defense is a freakish talent in linebacker Jalon Smith (6-2, 240, Jr). This first team All-American plays well in space and can cover as well as any linebacker in the country. He is also a terror as a pass rusher and big-play specialist. Smith is the kind of athlete that you have to account for on every play. Keep an eye on number nine Saturday evening.

Joe Schmidt (6-1, 235, Sr) is a bright linebacker that is the quarterback of this side of the ball for the Irish. He is Notre Dame's version of Ben Boulware

This defense looked great in holding Texas to 163 yards and three points in the season opener. The Longhorns had just 60 yards on 29 carries.

Virginia had 416 yards and 27 points against Notre Dame at home and came to within 12 seconds of upsetting the Irish. Matt Johns threw for 289 yards and two touchdowns for the Cavs.

Georgia Tech runs a completely different offense, but the Irish held Tech to seven points until the final minute of the game.

Last week UMass had 148 yards rushing and was 28 of 48 for 302 yards through the air. The 27 points scored by UMass tied the season high for Notre Dame's opponents.

Van Gorder is in his second year as the defensive coordinator at Notre Dame and is usually pretty aggressive in his schemes. I will be very interested to see how much pressure he chooses to bring against Deshaun Watson