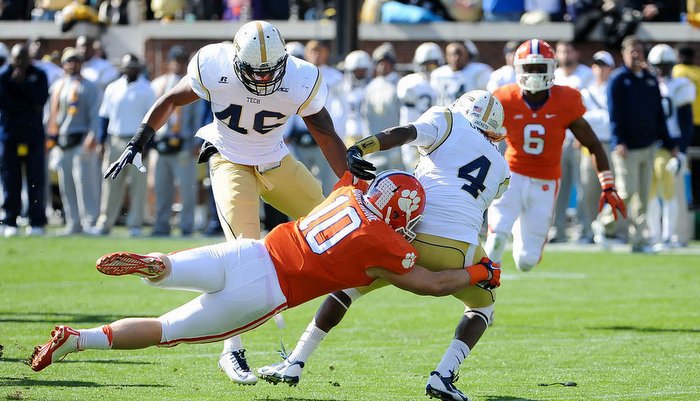 Saturday's scrimmage gave us an indication of some positives and negatives of this football team at this stage of camp, but unfortunately it gave us some surprising news. Korrie Rogers has decided to give up football.

The former four-star linebacker from Buford, GA red-shirted last season and was listed as the second team WILL linebacker going into camp. Rogers never really set the woods on fire a Clemson, but he was only here for a short stay.

Martin Aiken
RS Jr. Defensive End
#53 6-2, 255
Smoaks, SC
View Full Profile to WILL. Aiken has not made a splash at defensive end and was having a hard time gaining weight. Maybe he can contribute more at linebacker.

Rogers' departure means this is an even thinner linebacker corps. Clemson only has eight scholarship linebackers at the MIKE and WILL spots, and only two players have ever played a snap in college at linebacker.

Ben Boulware
Jr. Outside Linebacker
#10 6-0, 235
Anderson, SC
View Full Profile are the new starters at the inside linebacker positions. Both are upperclassmen, and both have played a significant amount of snaps in their careers.

The reserve six inside linebackers consist of five freshmen and a converted defensive end. I feel comfortable with red-shirt freshman Kendall Joseph

Kendall Joseph
RS Fr. Linebacker
#34 5-11, 225
Belton, SC
View Full Profile behind Goodson at MiKE. He is a natural linebacker with good instincts. What I don't feel comfortable about now is how much time he has missed in camp due to an injury.

Jalen Williams
Fr. Linebacker
#30 6-0, 215
Columbia, SC
View Full Profile is the new number linebacker at the WILL spot. This is a true freshman who came in the spring as a grey shirt. Williams is short, but also very instinctive.

Brent Venables
Def. Coordinator / Linebackers
View Full Profile is one of the best linebacker coaches in terms of developing talent. Unfortunately, he has fewer numbers now and has a short amount of time to get a bunch of freshmen ready to play.