I heard you on the radio this morning say you will be tweeting more. Great news! Welcome to the greatness of Twitter! Where can I follow you?

Thanks. I am looking forward to tweeting more. You can follow me @Mickeyplyler. Thanks for asking.

Enjoyed the shows this wk. Hope Ryan is doing good with his rehab.

1. Has there been or is there a softball team in the making an why don't Clemson have one?

2. What all can you tell about the last phase of the west zone? What is the oculus gonna be exactly? Will there be more seats added, monuments, any statues, I know there will be a museum but what else will there be?

3. I noticed that hall is #2 back up to meeks. Why isn't he out there with Meeks on the field together? Is the depth just that low?

4. Its a long way out but do you think the new athletic director will come in an push Dabo out or will they bring someone in that will keep him? I hope someone doesn't come in an remove him, cause Dabo is the motivation that Clemson has been missing an I think they have the pieces in place to be a power house in the making.

Thanks. Ryan is doing great. He has been in Clemson this week and is looking forward to tomorrow.

We have never had a softball team. I am not sure when one will be added, if ever. The biggest drawback is the cost of a stadium.

The final phase will include a history section. There will be more military heritage section. I doubt there will be seats or statues but the new section will be in front of the current building.

I think Hall will see more action because Brewer may be moved to corner for more snaps. I don't think we are done with position moves in the secondary.

If Dabo wins, he will be here as long as he wins, no matter who the AD is.

At what point can we begin to wonder if CU's weak lay in the secondary is related to coaching? I know the kids love to play for Coach Cheese and he's respected throughout the country and a very good recruiter but it's starting to feel like were talking about Brad Scott but at a diff. position. That was always the story with Scott, great recruiter, well respected, etc. but maybe not the best O-Line coach.

I think it hurts we've missed out on Chaney, McKelvey and Williams. Hopefully Tankersly will be coming in with Shaq in January. Always enjoy when Larry Williams is on the show!

I am not sure why the defensive backs have not played better. I do think that Harbison is one of the most respected defensive back coaches in the country. He has been offered several jobs since he has been here. He has won championships at LSU and Alabama. I doubt he is the issue. I wish I knew the answer though because the secondary is the biggest concern in my opinion.

There were lots of preseason question marks, and there still are.  But now we have more information.  I promise not to ask again this season but considering:

1)  Clemson’s win in a game that, preseason, looked like a tough one, and

2)  Clemson’s performance (especially the O-line) against Auburn, and

Does your preseason prediction of a 9-3 season still seem right or would you revise your estimate?

I think you make very good points. Clemson's offensive line played much better than anticipated. Also other schools on the schedule did struggle. However, I am trying to not make too many judgements based on one game. The season is long and a lot of things change over the course of a football season. Clemson is an injury to Boyd or Ellington away from disaster. But if healthy, this team could be special.

1. What are the chances the NCAA reverses the helmet rule?

2. Do you think coaches have/will encourage players to try and pull helmets off during important plays? (We're all biased--obviously--but I've NEVER seen a helmet come off that many times in one game, from one player.)

3. Does Coach Swinney know how unprofessional he looks when giving a 20-minute halftime interview? 20-25 seconds MAX. Leave them wanting more, not trying to push you towards the locker room.

I think we could see it overturned because players will start going after helmets. The rule is about safety but if it backfires then they could change it. The rule could be more dangerous. I think you could see players understanding the rule and trying to go after helmets. Dabo is as long winded as me. We can't say anything in only 20 seconds.

Having attended the game Saturday, which was a very competitive game between two good programs and fan bases, I am still confused as to why most of the Clemson fans are so thrilled with this defense. Except for the last two AU possessions, our defense was somewhere between terrible and average. We got hammered in the B gap all night, LB’s (outside of Willard who played a whale of a game; how does Anthony get defensive POG???) were routinely out of position/not filling gaps/couldn’t get off blocks, DE got reach blocked all night, could not set the edge to either side, secondary was ineffective as AU players were WIDE open all night, DB’s technique was marginal/never got their heads turned to the ball, DL got very little pressure on the QB……. the list goes on. Frazier is simply a horrible QB and with the QB’s in our conference, I could easily see this defense getting torched for 250+ yards in the air every week.

I do think the defense did a good job bottling up Frazier and forcing him to throw instead of run; Breeland played pretty well and Willard was easily the POG. However, outside a few isolated plays, I didn’t witness what everyone else seem to witness…… a great defense. I’ll be surprised if this defense can make the Top 50.

So, what am I missing?

Hope Ryan continues to improve; would love an update on Jake N. if you have one.

The defense had three blown coverages and I was disappointed in some of the run fits. However, they did tackle better than last season. There are talent issues on defense and recruiting is the only thing that can help. This defense will be better an last year but still will not be dominant. Ryan is doing great and I will check to see how Jake is doing for ya. I hear he is doing fine. I heard he looked good from someone who saw him at practice one day recently.

I am a 1976 and 77 graduate of Clemson living in Virginia.  Following the walk-off interview of Coach Swinney Saturday, the camera cut away to an aerial view of midfield.  I believe I saw both squads together on bended knee with heads bowed.  One, did I see correctly and two, was this a planned event???

Most schools do this after games now. Not every player does it but some do it every game. Usually one of the team pastors leads the prayer.

You have to point out the O-line next week. That was one of the best forth quarters the tigers have had in years.

Can't wait to listen this week on the way to Columbia.

I agree the offensive was impressive. Beasley, Freeman and Shatley played extremely well. This was the best I have seen the guards play in a long time. This week Shaq Anthony 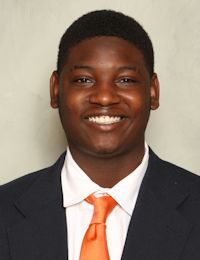 Shaq Anthony
RS Fr. Offensive Tackle
#76 6-4, 265
Williamston, SC
View Full Profile gets the start because of Timothy's injury. I will be interested to see him Saturday.