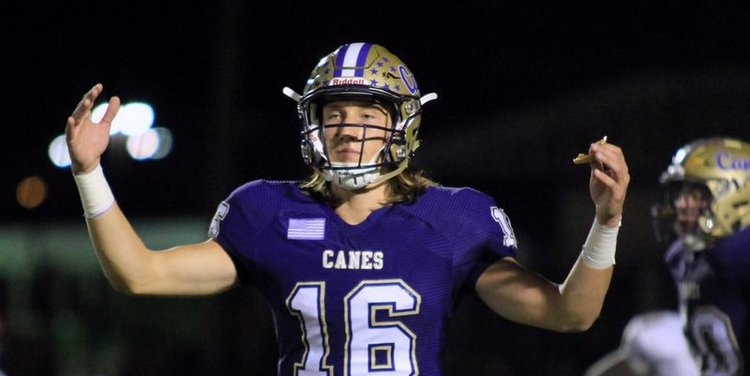 Lawrence is a big-time recruit for Clemson

Clemson 5-star star quarterback commit Trevor Lawrence was 18-for-22 with 403 yards and four passing touchdowns in Cartersville's 52-45 win over Bartram Trail on Friday night on ESPN2.

Lawrence was named GEICO MVP of the game as the signal-caller has now led his team to 32 straight wins and they haven't lost since the 2014 AAAA State Semifinals.

Check out some of his impressive highlights during the game and Twitter reaction around the Internet.

Perfect placement by #Clemson commit Trevor Lawrence to get Cartersville on the board. https://t.co/mHocN1UBXZ

What a magnificent throw by Trevor Lawrence, who is on an absolute roll right now. https://t.co/J04FP1gsRB

Lawrence takes it to the 2 pic.twitter.com/pbW7ssPzjS

Game over, Canes win! 52-45 over Bartram Trail. What. A. Game @dailytribsports pic.twitter.com/QwLuVMvIVl

Trevor Lawrence just made the strongest throw I've ever seen from a QB throwing across his body. At any level.

That throw from Trevor Lawrence,?? the catch by the receiver. The placement of the football and the window he threw it in. #Cmon Man ??????????????

I really hope all Top 2018-20 WRs are watching ESPN2 right now...The Best is yet to come @ClemsonFB

With the 1st pick in the 2021 NFL draft, the Jacksonville Jaguars select Trevor Lawrence, QB, Clemson

Lawrence has already signed his financial aid papers, will start classes at Clemson in a little over four months

I don't have the video, but the last throw by Trevor Lawrence @Trevorlawrencee was a SUNDAY throw. #Clemson