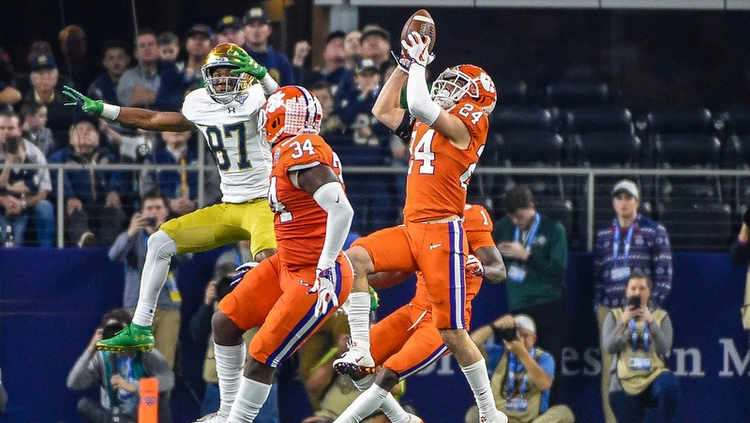 Different non-conference games could be in peril this schedule.

A long-awaited return to Notre Dame is the crown jewel of Clemson's 2020 slate this November.

If non-conference games can go on as or-close-to-as-scheduled, it may be one of the more likely to survive the uncertainties of the COVID-19 pandemic and this fall.

Why? In a word, resources.

College football reporter Matt Hayes reported earlier this week that athletic directors and more working in college football said it will be a "minor miracle" if non-conference games happen due to varying protocols. He added that a "pause" of the start until October is "realistic and likely, especially if season trending toward (conference) games only."

Longtime ACC writer David Teel talked to a member of the ACC COVID-19 advisory group, Wake Forest's Murphy Grant, and came to a similar conclusion, as a number of non-Power 5 Conference teams may struggle to keep up with the testing protocols that Power 5s can. Notre Dame would be an exception in that area.

As for football at all in the fall, Grant doesn't have a definitive answer either.

“I think I get asked that question every single day,” Grant told the Richmond Times-Dispatch, “and I truly don’t know how to answer that.”

Back to Hayes, he believes a potential spring season is a "last resort deal."

The Ivy League at the FCS level of Division I appears to be going that route, and while there has been talk of them leading a move that way, Hayes and others don't see the Power 5 following:

It’s easy for the Ivy League, with collective billions in endowments, to say let’s wait for spring — even when there’s no guarantee spring will be safer than the fall. It’s a no-brainer for them.

Pac-12 commissioner Larry Scott: "Everyone is looking around the country and taking an interest in what they do, but I don't think it's going to have any bearing on what we do.” https://t.co/7pJL7gq8W9

One more P5 official this AM texting me about 2nd semester FB, copied and pasted: “Matt, are you serious? We have NO idea what Feb-April will look like with the virus. It is absolutely last resort.”

Wilner's own proposal calls for the Pac-12 to delay the season by two weeks, move the Pac-12 title game back a week, drop a cross-division game and have flex weekends built-in for teams to possibly reschedule matchups.

Clemson is scheduled to open its 2020 slate at Georgia Tech on Sept. 3.

Talking to ADs and industry folks all day. Consensus:
— Minor miracle if non-con games happen. Not everyone on same protocols.
— A pause (to, say, October) is realistic and likely, especially if season trending toward conf games only.
— In Navy speak, CoVid has the Con.

It’s disastrous for the sport, with so many unintended consequences. Last resort deal. https://t.co/8XdnjbVKPX