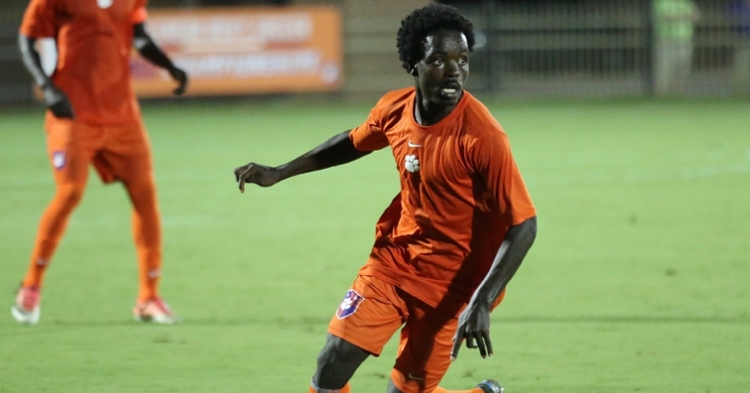 Raleigh, N.C. – The second-ranked Clemson men’s soccer team earned a 3-0 victory over the NC State Wolfpack on Friday night to improve to 14-1-1 overall and 6-1-1 in conference play. The Tigers’ conference record gave Clemson the Atlantic Division title and a share of the conference's regular-season title. Clemson will enter the conference tournament as the No. 1 seed.

“We’re elated with the divisional title,” said Head Coach Mike Noonan after the performance. “We have done Clemson proud all season and tonight was no different. I was very happy tonight that our backline and George [Marks] got the clean sheet. They have worked unbelievably hard all year. For Malick [Mbaye] to score the final goal of the game, as a defender and a senior, it epitomizes what this team is about.”

Friday's result made it the 12th game this season where the Tigers have scored three or more goals in a match, along with making it the team’s fifth-consecutive win and seventh-consecutive match unbeaten. With the Tigers’ three goals, they have finished the regular season with 60 goals and a 3.75 average in scoring offense. This is the best mark in the NCAA since 1998, when UNC-Greensboro averaged 3.64 through its season. The Tigers’ goal tally makes this year’s squad the 13th highest-scoring team in program history.

Robbie Robinson led the team’s attacking efforts by tallying three points on the night, contributing an assist on the game’s opening goal and scoring the team’s second. The three points for Robinson bring his season total, and nation-leading mark, to 39.

George Marks, a native of Raleigh, earned his fifth solo shutout of the season while saving six shots from the Wolfpack. This is the eighth time this season that Clemson has held their opponents to a scoreless result.

For those that came before us, last night was for you.

Relive all of the emotions from Friday night's thrilling victory as we captured the Atlantic Division title!#ClemsonUnited pic.twitter.com/uK6a5HPcSP