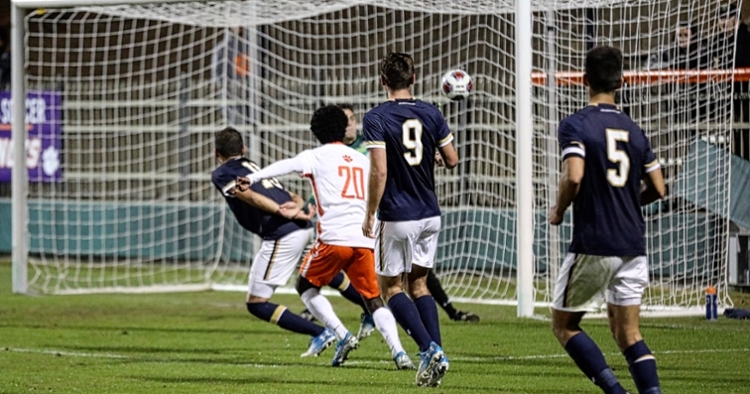 Clemson, S.C. - The No. 2 Clemson men’s soccer team improved to 15-1-1 on the year after defeating the Notre Dame Fighting Irish under the lights of Historic Riggs Field by a 3-0 margin in ACC quarterfinal action. Clemson, the top-seed in the ACC tournament, registered 32 shots in its effort. This is the most in a match by the team during the 2019 campaign. The three goals by Clemson brings the team’s season tally to 63, with the squad now averaging 3.70 goals per match.

After a scoreless first 45 minutes of play, Clemson’s opening goal was registered by Phillip Mayaka nine minutes into the second half. Mayaka’s goal made him the 10th Tiger to score two or more goals on the season. George Marks celebrated his birthday today with a shutout performance in net, bringing the team’s shutout total to nine on the year.

A total of 17 players saw time on the field tonight for the Tigers. Adrian Nunez and Grayson Barber led the way in shots taken, each registering five. Three of Nunez’s five shots were on frame. The Tigers have outscored the Irish by a 7-2 margin on the season following tonight’s result. A 4-2 decision went in favor of the Tigers earlier in the year.

“Our team played really well. At half, we told the team to play with a patient urgency because we knew they [Notre Dame] would break if we kept playing as well as we had. With our defense, we have been practicing it all week and George made a huge save in the first half to keep the score even.”

Up next for the Tigers will be a semifinal match against the Pittsburgh Panthers. The Panthers hold the fourth seed in the tournament and advanced to the semifinals after a 2-1 victory over NC State earlier tonight. The semifinal match is set to be played at Historic Riggs Field on Wednesday, Nov. 13 and will kick-off at 6 p.m.

Check out the best moments from the team's win in our recap video! ?? pic.twitter.com/G3gR48BHqh