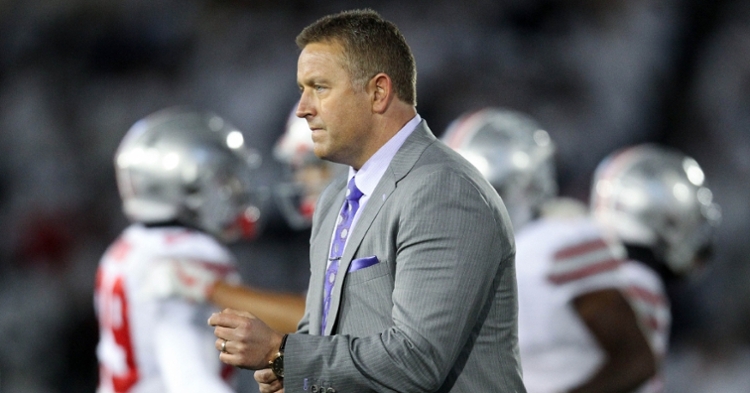 Kirk Herbstreit is ready to call some football games and travel around the country.

ESPN's lead college football analyst is set to get to work in the booth on Labor Day, he told a Nashville sports talk station this week.

“I don’t know that I’ve ever been more excited for a BYU/Navy game than this game," Herbstreit said of the scheduled 8 p.m. kickoff on Sept. 7.

Herbstreit said he's gotten the feel that the season -- for the six conference playing -- will go on unless there is a major outbreak. He has heard concerns about testing and the consistency of that testing nationally, however. Herbstreit is confident in what Clemson is doing for his sons Jake and Tye on the team.

"We can sit here and freak out about that or try to do the best you can and adjust accordingly and listen to what they say as far as guidelines and wear a mask," he said. "Stay six feet apart, social-distancing and let it rip. Live your life. So far, I’ve been very, very happy with everything. If they push on and play in the ACC, then more power to them. They clearly feel that they have everything in place to be able to create a safe environment and they feel they can push forward. We’ll see if that ends up happening.

"Hopefully for football fans and the players themselves -- hopefully they get that opportunity. We’re still a couple weeks away from it."

Herbstreit was asked about how this season will be remembered, given that two Power 5 conferences are sitting it out.

“I think Ohio State was (No.) 2 (in the AP Top 25). Penn State was up there. Oregon was up there. All up in the top 10," Herbstreit said. "When you eliminate them -- if we just threw them in, for argument’s sake, and you ask the entire nation of analysts, ‘Who is going to be in your playoff?’ The consensus is probably going to be an Alabama or Georgia type of team, an Ohio State, a Clemson, and then it’s an argument about is there a second SEC team? Is there a second Big Ten team? Does Oregon make it? Does Oklahoma make it? That would be the discussion, so you’re really eliminating Ohio State, Oregon, and Penn State from the potential playoff.”

"A lot of people would feel (Clemson), with Trevor Lawrence, no matter who’s in it has a pretty good chance of making it into the playoff and into a national championship. A lot of people feel that probably Georgia, Florida, or Alabama would have a really good chance to make it too. It’ll feel a little different, not having everybody in, but if you do end up getting through, which again still remains to be seen if we will. But if we do get through it and we’ve got four teams standing there at the end … you’re still talking about some of the big boys...

How will ESPN's franchise show College GameDay look in 2020? Herbstreit says they are still planning to do the show on-site but likely without fans in a stadium setting of some type. He said one of the plans might be to follow some sports action this summer and have fans involved in a virtual manner.