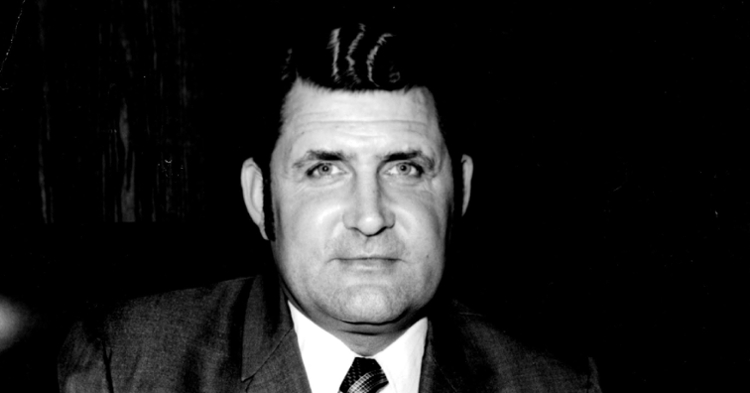 Clemson, SC--Former Clemson All-American Thomas Everett "Black Cat" Barton, one of Frank Howard’s most respected players of the 1950s, passed away peacefully at home on Wednesday, March 18, 2020. The Clemson football lettermen from 1950-52 was 90-years-old.

After serving in the public school system as a teacher, coach and school superintendent, Barton became the President of Greenville Technical College, serving from 1962-2008. Active in the community he served on numerous local and state boards and served on President Bush's Advisory Committee Education Board.

Over the last 20 years of Coach Howard’s life, when asked about the success of his former players, he always listed Barton near the top of his list. He took great pride in having a former player who became president of a college. Barton is the second Howard player who became a university president to pass away within the last month as Phil Prince, a senior on the 1948 team, died last month.

In fact, it was Howard who gave him the nickname “Black Cat” because of his dark hair and quick first step on the gridiron.

During his senior year Barton was named a second-team All-American by UPI, the first Clemson defensive lineman in history to earn All-America honors. He was also named All-State and All-South. At the conclusion of the academic year, he was the recipient of the Clemson Blue Key Award as the school’s top athlete in any sport.

Barton was selected in the sixth round, the 66th over pick of the NFL draft by the Pittsburgh Steelers. However, he suffered a knee injury in the College All-Star Game in July of 1953 and the injury ended his career.

At the conclusion of his 30-year coaching career, Howard named Barton to his All-Howard team.

Additionally, Barton was named one of the 50 most influential residents of Greenville by Greenville Business Magazine from 1997-2000. In 1995, he was named Business Person of the Year. He received the Whitney M. Young Humanitarian Award from the Greenville Urban League.

In 2000, the main campus of Greenville Technical College was dedicated and renamed in his honor to Dr. Thomas E. Barton Campus.

Barton is also a two-time recipient of the Order of the Palmetto (1975 and 2002), the state’s highest award for a civilian. He was also presented the Order of the Poinsettia and named No. 1 Citizen of Greenville in 2003.

The family would like to express its love and gratitude to his loving caregiver, Renee Jenkins, along with Ingrid, Tammy, Paula, Sarah and Sheba.

In light of the current restrictions placed on us due to the CDC, services will not be at this time. A Memorial service will be planned as soon as allowed. Online condolences may be made at www.mackeymortuary.com .