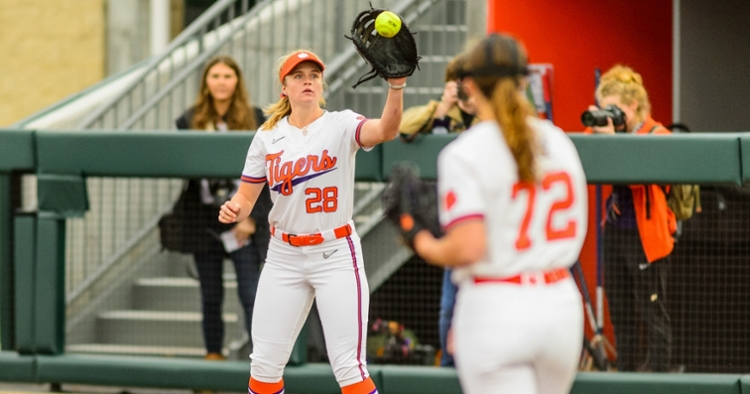 CLEMSON, S.C. – The Clemson Softball team dropped its first ACC contest of the season Sunday afternoon at Clemson Softball Stadium, falling to the Pitt Panthers 8-2. The loss snapped Clemson’s (18-8, 4-1 ACC) 10 game win streak, which dated back to Feb. 22. The Tigers registered three hits, the lowest total in the hit column since Feb. 8 against UCF.

Valerie Cagle and Marissa Guimbarda both picked up RBIs, and Grace Mattimore finished 1-for-2 with a double and scored a run for the Tigers.

Clemson struck first in the concluding game of the series, taking advantage of two hits to plate two runs in the home half of the first inning. Cammy Pereira led the inning off with a single up the middle and advanced to third when Grace Mattimore recorded her ACC-leading 10th double of the season. Cagle drove in her 33rd run of the season on an RBI-groundout in the next at-bat, which was followed by Guimbarda’s first sacrifice fly of the 2020 campaign, and her 30th RBI of the season.

Pitt claimed the lead - 6-2 - in the top of the fourth, plating six runs on five hits. The Panthers registered two home runs in the inning, one of them coming with the bases loaded. Pitt added another run on its third home run of the contest in the next inning to increase the lead to 7-2.

Logan Caymol received the loss in the contest, dropping her record to 7-2 on the season.

Up next, the Tigers return to Clemson Softball Stadium on Tuesday to host Presbyterian College (15-7) on Tuesday. First pitch is scheduled for 4 p.m., and is slated to stream on ACCNX. To purchase tickets, visit ClemsonTigers.com.

Clemson vs Pitt Box Score
ONE DAY ONLY! Fanatics.com Black Friday Sale 20% off on orders over $75
Comment on this story