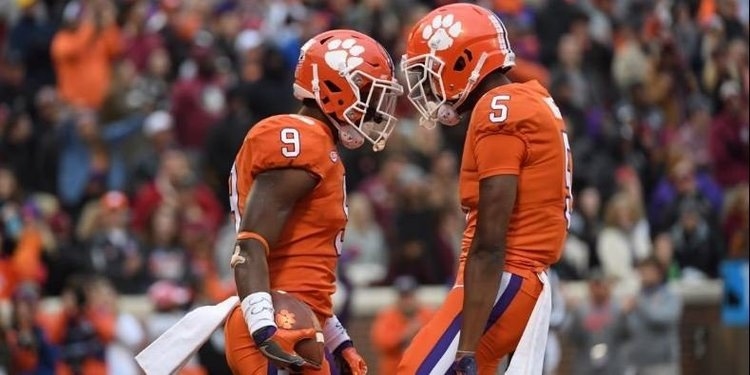 Clemson won a 41st-consecutive game by rushing for at least 200 yards.

* Clemson clinched the ACC Atlantic Division with the win over Florida State, marking Clemson’s third straight division title and the sixth in the past nine years.

* Clemson clinched a conference-related title, whether it be an outright ACC title or an ACC Atlantic Division title, at Memorial Stadium for the ninth time.

* Clemson improved to 24-2 in its last 26 contests versus ACC teams.

* Clemson improved to 51-2 in its last 53 games against unranked opponents.

* Clemson won its 58th game of the past five years, which is the second-most of any program in that stretch.

* Clemson won its 101st game of the past 10 years, which is tied for the fourth-most of any program in that stretch.

* Clemson improved to 22-1 in its last 23 games against ACC Atlantic Division opponents.

* Clemson defeated Florida State for the third straight time, dating back to 2014.

* Clemson shut out Florida State in the first half for the first time since 2003, a game that the Tigers won 26-10 at Memorial Stadium.

* Clemson defeated Florida State for the ninth time in the last 14 matchups between the two teams.

* The Clemson win marked the 13th time in the last 16 matchups that the home team has won in the series with Florida State.

* Clemson won for the 53rd straight time when holding an opponent to under 23 points.

* Clemson won for the 41st straight time when rushing for at least 200 yards.

* With the win, Dabo Swinney is guaranteed to coach in his fifth ACC Championship game as the head coach of Clemson.

* Swinney won his 98th game as the head coach of the Tigers, tying him with former North Carolina and Virginia Tech coach Bill Dooley for the fourth-most wins by an ACC coach in conference history. The 98 wins also serve as the fifth-highest win total for any head coach in his first 10 years as a head coach.

* Wide receiver Deon Cain hauled in a reception for the 33rd straight game.

* Wide receiver Hunter Renfrow hauled in a reception for the 24th straight game.

* Offensive tackle Mitch Hyatt started at left tackle for the 39th time in the last of 40 games.

* Safety Van Smith hauled in his first interception of the season.

* Kelly Bryant scored his 10th rushing touchdown of the season.

* Tight end D.J. Greenlee hauled in his first reception of the season.