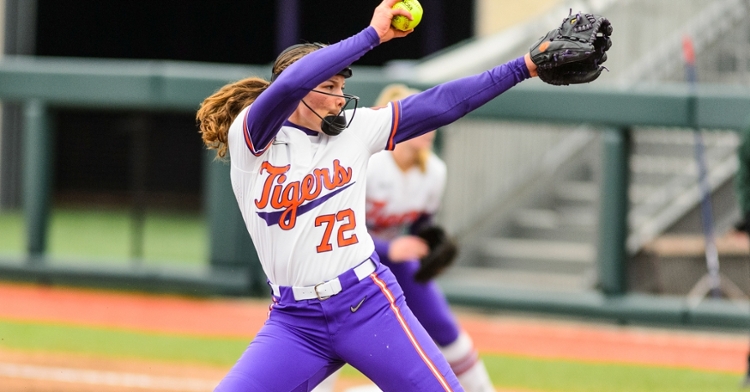 CLEMSON, S.C. – For the second time this season, the Clemson Softball team held its opponent scoreless, as the Tigers shut out Presbyterian College (16-8) 5-0 at Clemson Softball Stadium Tuesday afternoon. With the win, Clemson improved to 19-9 overall in its inaugural season. Freshman righty Valerie Cagle was dominant in the circle, earning her ninth win of the season, and recorded 11 strikeouts in 6.0 innings pitched.

Clemson took no time getting on the scoreboard in the bottom of the first inning, attacking the Blue Hose starting pitcher for a run on a hit and a walk. Reigning ACC Player of the Week Marissa Guimbarda recorded her second sacrifice fly in as many games to score Cammy Pereira from third to put the Tigers on the board, 1-0. The RBI was Guimbarda’s 31st on the season, second on the team behind Cagle who leads the ACC.

Cagle helped herself in the circle in terms of run support in the bottom of the third as she sent her 10th home run over the fence down the left-field line with two runners on base. Two batters later, freshman Hannah Goodwin registered her fourth long ball of the season, crushing a solo shot to left field to extend the Clemson lead to 5-0.

Up next, the Tigers head to Georgia Tech (11-11, 2-1 ACC) for their first ACC road series of the inaugural season, which is slated for March 13-15 at Shirley Clements Mewborn Field. All three contests are set to stream on ACCNX.

??Tigers strike first!! Marissa Guimbarda's sac fly to left field scores Cammy Pereira. That is her 31st RBI of the season and third straight game with at least one RBI!! ??

Valerie Cagle lines a three-run shot over the left-field fence ?? That is Cagle's 10 HR on the season! ??

?? Hannah Goodwin follows suit, sending a solo blast out of the park!! Tigers extend their lead to five.