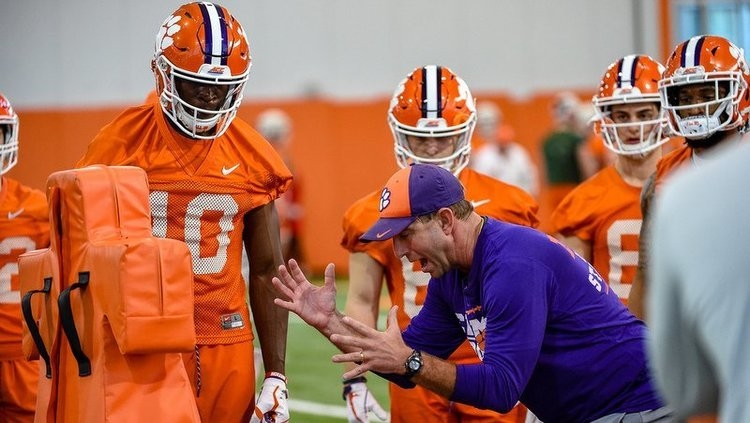 Clemson posted a pre-camp depth chart on its website recently to give a picture of where the Tigers are going into the start of practice Thursday.

Among the notables on offense, Braden Galloway, who made an impact in his return for the College Football Playoff, is positioned as the starting tight end ahead of JC Chalk and Davis Allen.

One receiver position has Joseph Ngata ahead of freshman E.J. Williams, while Amari Rodgers is the starter in the slot and Frank Ladson Jr. and Cornell Powell are co-starters at the another WR spot.

On the O-line, Blake Vinson and Will Putnam are pitted as competitors at right guard starting, with the rest of the line being (l-r) returning starter Jackson Carman, Matt Bockhorst, Cade Stewart and Jordan McFadden.

On defense, the starting linebacker trio is Mike Jones Jr. (SLB/NB), backed up by Trenton Simpson or Tyler Venables, with James Skalski in the middle (backed up by Jake Venables and then Kane Patterson) and Baylon Spector at weakside (backed up by Keith Maguire and then LaVonta Bentley).

The cornerback positions are all listed up for grabs with Derion Kendrick and LeAnthony Williams as co-starters on one side and Andrew Booth and Mario Goodrich co-starters on the other side.

Lannden Zanders is slated to move into the starting safety role with Ray Thornton III and Jalyn Phillips competing as well.

On the D-line, KJ Kenry and Xavier Thomas are listed as co-starters at one defensive end spot. No. 1-rated player Bryan Bresee is listed third behind starter Tyler Davis and sophomore Ruke Orhorhoro.

Clemson noted that Nyles Pinckney is expected to return to practice and be on future depth charts. Justyn Ross isn't listed because he is out for the season after offseason surgery.

Check out the whole depth chart below: