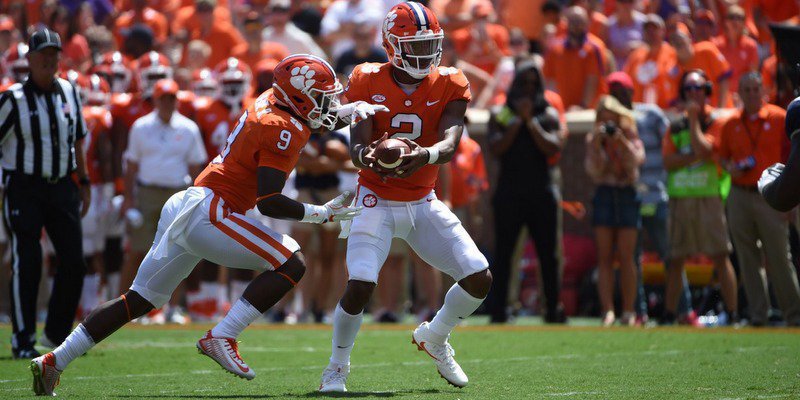 Mickey, my question is very simple, how do you get a QB whose instinct is to run first to the throw the ball?  Kelly has lost some confidence and not sure why.  The biggest example is when he didn’t throw the ball the Deon on the deep post.  If he doesn’t get over this quickly, it won’t matter where we are ranked.  USC and Miami will stack the box and dare him to beat them with his arm.  He will need to deliver.

A coach told me a long time ago that confidence only comes from success. He has to have success in practice first, then games. Bryant threw it better in the first half of the season and confidence grew. Jeff Scott talked this week about not being afraid to make a mistake. This offense has not turned to over as much this season, but there is a fine line between letting it rip and not making a fatal mistake. The next three weeks will be interesting.

The two fumbles at the goalline were created by Fla St. 99 coming in unblocked from the edge and disrupting the QB - running back exchange or fake hand off. Can't really blame the QB or running back.

Were these a failure of a player to execute a block or a failure in the blocking scheme developed by the Coaches that assumed a defensive end would not be able to get there so quickly?

The player who made the great plays was Brian Burns, one of the top defensive ends in the ACC. I think both were zone read plays. If they were zone reads then both times the player is not blocked on purpose because they option off of him. He was quick enough to get to the mesh and cause disruption on the first one. Bryant made a bad read and didn’t hang onto the ball on the second one. They were great plays by Burns, but poor ball security by Clemson.

I enjoyed your review of the FSU game. “IF” seems to be the word when analyzing the 2017 football team. If we get healthy, if KB throws a little better, if we cut out the dumb mistakes and if our WRs step up a little more, we can become a very, very good team!

There are no dominant teams this year, so everyone’s margin of error is smaller. This is November football and the warts start to show. Alabama escaped last week. Georgia got embarrassed. Notre Dame got routed. The top teams have issues and they can be exposed. Ther are no Clemson and Alabama from 2015 and 2016 this season and everyone has the “ifs”.

I just read your article and agree with everything.  In past years (before 2015) we may not have won some of the games we are winning this year.  The mentality of the Clemson program is different now than before our championship runs.  My question concerns the hit on Carter.  Is there anything outside of the FSU program that would give suspension to the guilty party ? Or is it just a targeting call penalty and suspension for the next half they play ?  I think more should be done for such an egregious foul.

The only punishment are the ones you wrote about and it doesn’t seem like FSU is going to take any internal action.

First, I think our coaching staff should be congratulated for the season the Tigers are putting together considering the talent that left after the championship season.

Looking forward, I've always had respect for coaches like Don Shula who can adapt their coaching styles to fit the talents of the players on the field. Next season we expect to have Trevor Lawrence join Hunter Johnson giving us two of the most respected passer recruits in recent memory. Not to mention this is WRU. Can we expect the coaching staff to modify the offense or stick with the read option? I can't imagine a record breaker like Lawrence expects to come to Clemson to risk his career by running between the tackles 20 times a game.

This staff is loyal and Bryant will be the starter entering the spring, but if Johnson or Lawrence show they move the offense better then they will play. This staff wants to win and will play the guy who gives them the best chance.

I want to nominate Coach V and his defensive coaching staff for coaches of the year.  The national pundits all want to talk about the injuries to bama's defense and they are big, but I am not sure ours aren't more impactful.  This team was always going to go as far as the defense took it.  Yes, we have had outstanding balance on the offensive side of the ball, but if you told me at the beginning of the year that we would lose both corners, a safety, all three linebackers, a DT and depth at DT and DE, I would have said, lets get some guys ready to play 2018.  The defense has truly been next man up.  Yes, they are well recruited and talented players, but those guys were starters for a reason.

If we are to get back to the natty, we have to get some guys back on the field at 100%.  We don't beat the chickens or canes with the lack of depth we have due to injuries.  Healthy, I think we are one of the best teams with a real shot.  Nobody else is dominant like you said in your column.  With 28, 9, 27 and 26, we can run the ball and control the clock to take some pressure off 2 to throw and to help the D.   IMO, Coach V and his staff deserve a ton of credit for getting us this far.  Hopefully we can get a good lead this week and rest some legs and get some guys back healthy to go to Columbia and Charlotte and leave no doubt.

Hey Mickey, I went to the Furman/Citadel game Saturday. On Furman’s first 7 possessions they scored 7 TD’s before they took out the first team. Don’t think I have ever seen that. Obviously the Tigers can name the score Saturday.

I saw that score and didn’t see it coming before the game. I am excited about this game because I want to see a bunch of the reserves play well. This will be our longest look at some very talented reserves.

I am writing this before the Playoff rankings come out but that is the least of Clemson's concerns right now.  After the games Saturday, several things jump at me.  (1) The young Clemson defense is truly amazing and the coaches were brilliant in giving up style points and playing so many players all year.  (2) We have to get some players healthy on defense.  (3) On offense, fumbles have to stop and Bryant has to do a better job connecting on passes over 10 yards long.  (4) Travis Etienne has to get more touches.  (5) There are games left but the ACC is far from the conference it was last year and might only wind up with 2 ranked teams.

The State, ACC and National Championships are still all on the table but the road is still long and still tough.  Like it or not, Will Muschamp has done a great job at South Carolina this year and the game in Columbia will be an absolute dogfight for the Tigers.  Like it or not, Miami is fast, strong, talented and will probably be favored in the ACC Championship game unless Clemson plays better the next 2 weeks.

One game at a time but maybe more importantly is no injuries this week and getting players back before the game in Columbia.   The training staff may be MVPs if Championships are won the next few weeks.

I agree with everything you said except for the line between Clemson and Miami. The Tigers will be a slight favorite in Charlotte.

Great win for the Tigers against FSU. There was a lot said during the game about Kelly Bryant and the deep passing game. I know we have a really deep receiving corps and all the 5 stars want playing time and action, but do you think the continual rotation of receivers has hurt Kelly's timing and chemistry with the group?

Thanks and GO TIGERS!

No, I think the wide receivers have hurt the wide receivers. If there are limited opportunities then you have to take advantage of them when they come. Clemson threw it 30 times last week. That number isn’t low but when the ball comes your way you have to catch the football. Also, I would love to see better blocking on the perimeter. Some of the blocking efforts have been awful. The term WRU is earned, not given.