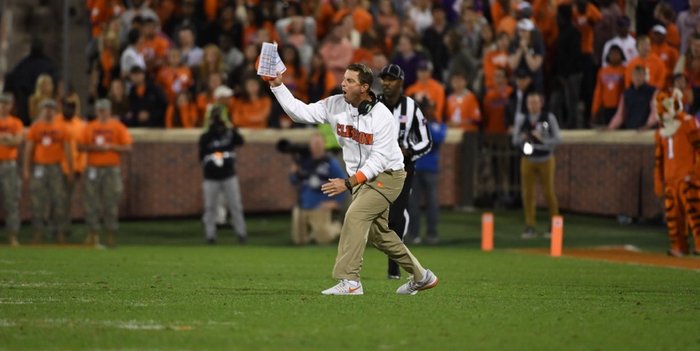 That crew that refereed the game is another embarrassment to the ACC in a long list of complaints about our referees. Why can't the officials see what is going on and do something.

We are the laughing stock of college football for our referees.

The officials are graded and held accountable. Unfortunately, in this case, it's too late and when they are disciplined it is private. Saturday night was as bad as I have seen in some time.

I was just curious as to why the last home game of the season is not senior day? Why celebrate a game as the last time the seniors run down the hill, when there is still another home game on the schedule?

I don't know for sure, but my guess is the staff wanted to devote full attention to South Carolina and not have any distractions.

Did you see this article? This article is interesting. http://theclemsoninsider.com/2016/11/13/pattern-emerges-with-saturdays-officiating-crew-calling-clemson-games/

I did. I can tell you Clemson's football staff was concerned before the game. They saw all they needed to see in the Georgia Tech game. They were very aware of what they were facing.

Look, there is still life for the Playoffs in Tiger Town maybe only because Iowa of all teams, beat Michigan and USC beat up on Washington. It is not over until it is over so why does it feel so bad to lose to Pitt? Let's face it, Clemson has dangled over the cliff all year and a really bad throw for an interception on a horribly dumb play call sealed the deal for the loss. Up 42-34 with 5:42 left in the game and the ball on about the 4 yard line, how do you throw? I understand Clemson could not run with any success against the Pitt D but Gallman had already scored 3 times and even if we do not gain a yard, either about a minute more goes off the clock or Pitt uses a timeout that they needed later. Kick a field goal and go up 45-34 and we are all happy to dodge another bullet.

There are issues on both sides of the ball but there is at least light in the tunnel. Clearly, someone needs to introduce the defense to tight ends and running backs. Somehow, some way, the penalties and turnovers have to stop. Someone on the offensive line has to put on their big boy pants and actually block for the running backs. Beating Wake next week wins the division and beating South Carolina sets up an ACC Championship game with the Playoffs on the line. Dealing with the lose is not fun because we are not used to it but somehow there is another life left in the Tigers.

A field goal would have all but iced the game, and the turnovers have been maddening. Matching up with tight ends, slot receivers and backs are difficult for most defenses, but Clemson does have a very difficult matchup. And I agree, we are thankful everything is still on the table.

Also, I totally agree that this team doesn’t have the killer instinct. So how do you get that killer instinct ? Is it something you can coach ? Or do you just have to have “it” ?

I was a student in the early ‘80s, and it seemed most of the Danny Ford coached teams had it. I’m at a loss as to how you instill that in a team.

I am not sure how you gain it. I would say maybe it's something to really emphasize in practice. Maybe they could talk about it more and make it more of a point of emphasis. But I am not sure it can be taught.

Dabo can quote all of the stats he wants, but something is different this year. I have re-watched several games and what seems prevalent is Deshaun thinking versus reacting. Look at the drives when it’s 2 minutes in the half. Each time, he takes the team down the field for a score. During the rest of the game, it appears he’s waiting for the play call. In fact you see many times Deshaun is asking for the play. I am still unclear who calls the plays, but they need to get it done faster and allow Watson to react to the defense versus analyzing it. I understand the argument of seeing what the defense is giving you, but when you have the play makers we do, you have to do what you do well. I think that’s what made Chad so good. Yes, Deshaun is making some bad decisions, but I think part of that comes from the lack of rhythm from slow play calling. Call each series like you in the last two minutes of the half, and Pitt is a win.

I agree with you. Something is missing. Watson has made more mistakes than last year. He has looked like he puts too much pressure on himself. His decision making has not been on point many times this season.

Your blog today on Killer Instinct echoed some thoughts I have had about this team for awhile (actually dating back to last season when the trend seemed to start). Sadly, you could also point to the National Championship game, as well as the others on your list, because there were opportunities in that game to take control and we did not capitalize. This program is having a great run, and I expect us to continue to be one of the best programs in the country for awhile, but if we are going to take another step toward greatness, then we have to start putting teams away when we have the chance. People may say style points do not matter, but I would contend Louisville has its current ranking in large part because of style points.

My question is why do you think we lack the killer instinct? Is Dabo too nice? Is it because of playing the reserves earlier in games? Can't be lack of depth because we are deeper than most teams we play. Are our players not that tough? Does the play-calling become too conservative when we have a lead? Or is it some combination of all of the above? Do you know if the coaches are doing anything to address this, or is there even a way to address it?

Thank you in advance for your reply.

Dabo is not too nice. He is hard with the players and his staff in practice and in the games. He is extremely demanding. Play calling may be an issue. One theory is these guys let up but come through in the clutch, so the sense of urgency is missed. Sometimes it's like they don't mind the dramatic endings, but I know that's not the real reason.

Since the Clemson running game is struggling and since there will be a 20 mph wind Saturday evening, will this hurt Clemson more than Wake Forest?

That's a good question. Ask me Monday. Just kidding. I think Clemson is more balanced and more experienced. Hopefully, it won't be a huge factor, but good teams win in bad weather despite the weather being a factor.