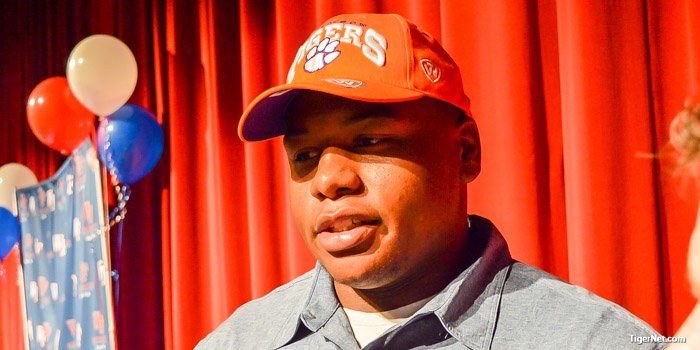 As we mentioned in yesterday's blog, one of the major storylines of this camp is this amazing freshmen class. Often the newcomers make headlines because of their arrival on campus and the familiarity of the returning players. However, the longer camp goes, the better the chance for the veteran player to separate from the newcomers. But this class has some incredible talent.

Yesterday we looked at the freshmen on offense that may have a chance to avoid a red-shirt. While it is still too early to tell, here is a look at some defenders we may see this season.

There is little doubt in my mind that Xavier Kelly will play early and often this season. The Kansas native came into camp as one of the most physically impressive freshmen. He has the body to compete right away. LaSamuel Davis will never be a big defensive end, but my guess is he will have to red-shirt this season to add strength to develop into a pass rusher.

At defensive tackle, the Tigers inked two in this past class. We got a look at Dexter Lawrence this spring as he was an early enrollee and he did not disappoint. Lawrence was the nation's number two ranked prospect according to rivals.com, and it is easy to see why he has an NFL future. They just don't make players like this very often. At 6-5 and 342, he moves like a 280-pounder. This is simply an elite defensive tackle. Nyles Pickney has a great future as well and many years would avoid a red-shirt, but because of depth here, I wouldn't be surprised to see him red-shirt this season.

The Tigers hit a couple of home runs at linebacker. Tre Lamar looks like an NFL linebacker. He looks like what Alabama lines up with at MIKE every year. Lamar is not only 6-4 and 235, but he is also a bright football player with natural instincts. Shaq Smith is a second five-star prospect at linebacker. He is not quite as instinctive as Lamar, but he is a great looking player that should play as a freshman. Jamie Skalski looks like a Ben Boulware clone. Clemson could use help on the special teams, and I wouldn't be surprised to see him play this year as well.

Perhaps the biggest star from this class on defense has been Trayvon Mullen. This long corner has been a hit since he first stepped on the practice fields and may have a chance to play very early at Auburn. Mullen has drawn some of the best reviews in his attempts to defend stars like Mike Williams on a consistent basis. Kvon Wallace has also gotten nice reviews in playing multiple positions in the secondary. Wallace and Mullen has a chance at meaningful snaps partly due to injuries to Adrian Baker from the spring and Marcus Edmonds and Ryan Carter this fall. I could see Isaiah Simmons and Nolan Turner helping mainly on special teams unless injuries mount in the secondary.

Again it is way too early for the staff to make final decisions on these freshmen, but this talented class is making strong cases to see the field very early.