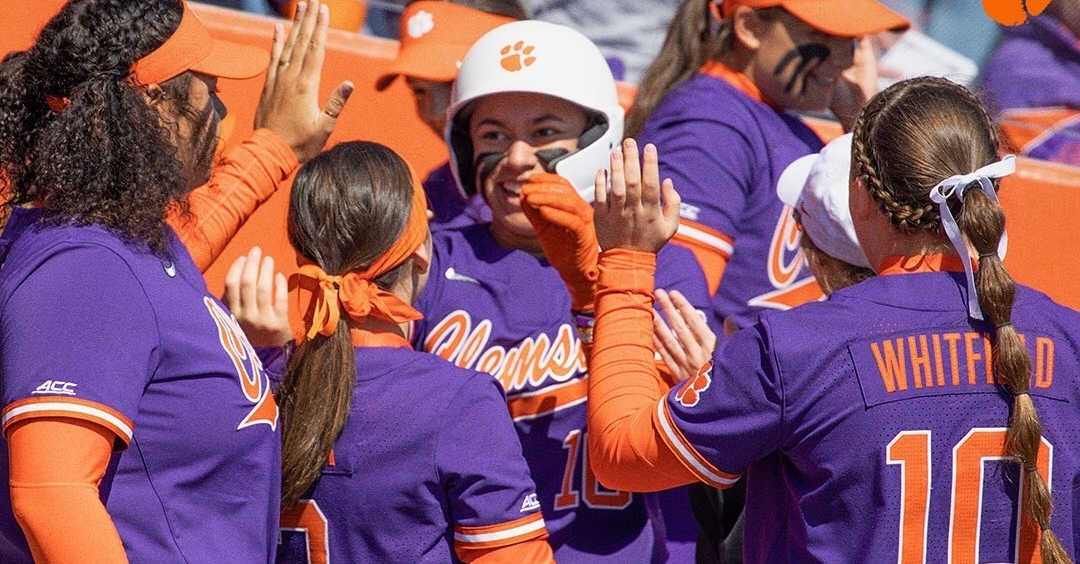 CLEMSON – The Clemson softball team defeated Virginia Saturday afternoon by a score of 8-4 in the second game of a three-game series at Clemson Softball Stadium.

The win marks another historic moment in Clemson Softball history as this is their first ACC series win in program history after their win Friday night on a walk-off home run and their win today.

“After last night, coming out this afternoon, facing a tough opponent, I thought we jumped on them early. We kind of squandered the lead a little bit but fought back to take the lead,” Clemson head coach John Rittman said.

The Clemson bats were alive against Virginia as they had 12 hits on the day and produced some timely hitting to grow and keep their lead.

After a 1-2-3 top of the first inning from pitcher Logan Caymol, the Clemson batter came out swinging in the bottom of the first.

“The biggest thing was we were hitting our pitches,” coach Rittman said. “we weren’t chasing a lot and we had seen (their pitcher) yesterday and that was an advantage for us.”

The Tigers loaded the bases with two outs and then three consecutive singles brought around four runs to give the home team an early 4-0 lead over Virginia.

Virginia answered with two runs of their own in the top of the second to cut the lead to 4-2.

In the top of the third, Virginia tied the game up at four runs apiece with back-to-back home runs.

“The biggest thing was to just tell Logan to flush it,” Rittman said. “She needs to battle back and she didn’t have great command in those middle innings and she fought through it. (We were) just trying to get her comfortable and in a rhythm out there,” Rittman said.

Clemson answered in the bottom of the third inning with a double and then a single from MK Bonamy to give them a 5-4 lead.

Clemson added to their lead in the bottom of the fourth inning after a double from Valerie Cagle brought around two runs to make it 7-4 Clemson. The Tigers continued to add on as a fielder’s choice brought in another run to give Clemson a four-run lead.

It was a big day for MK Bonamy, who went 2 for 4 and had 3 RBIs for the Tigers. It seemed like almost everything was going her way today.

“I just saw that my team needed me and I had the opportunity to score runs so I wanted to capitalize for my team,” Bonamy said of her performance.

Cammy Pereira also had a good day as she went 3 for 5 and scored two runs for the Tigers. She gave Clemson a lot of momentum in the leadoff spot.

The Tigers will go for the sweep in their first-ever ACC series Sunday afternoon at 1 p.m. in Clemson Softball Stadium.

“The biggest thing is to jump on them early,” Rittman said. “We’ve got to come out and bring a lot of energy, a lot of passion, and play with aggressiveness.”