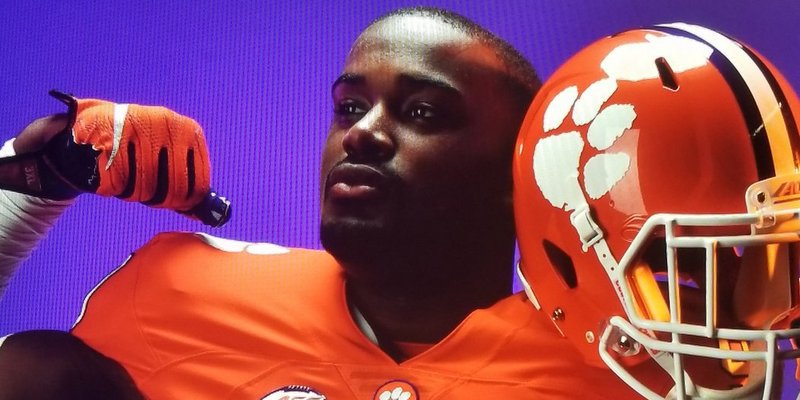 Jefferies poses for the camera Friday

Darnell Jefferies is the kind of player that could quickly turn into a fan favorite when he arrives on campus, and not just because of his play on the field.

Jefferies likes to laugh and he likes to have a good time, and he’s already become a favorite of the members of the 2018 recruiting class, including linebacker Jake Venables.

Jefferies, out of Covington (GA) Newton, committed to the Tigers in early June. joining quarterback Trevor Lawrence of Cartersville and defensive end Justin Mascoll of Snellville as Georgia prospects to pick the Tigers.

Jefferies had narrowed his list in early May to a final 10 that also included USC, Notre Dame, Ohio State, Alabama, Georgia, Louisville, LSU, Georgia Tech and Oregon, but later admitted that he knew Clemson was where he wanted to play.

Friday, Jefferies was on hand for the All In Cookout, stunning everyone by easily winning the watermelon eating contest, taking lefty swings in the wiffle ball home run derby (he finished second and fourth) and taking part in the photo shoot in the green room on the second floor of the new Reeves Football Operations Complex.

“It was great. The best part was the true family feeling and the amount of genuine fun we had,” Jefferies told TigerNet. “It was a blast all day. I enjoyed everything, and I did win the watermelon eating contest because eating is my second sport. It was really fun and there was fun to be had all day.”

Jefferies poses for the camera Friday "

Venables said Jefferies wins people over with his attitude.

“It was so funny, because everybody had a bunch of chairs set out behind the cameraman,” Venables said. “So even family members were in there, too. It was fun because everybody was laughing at each other. They could see the pictures up on the big TV. And the best part of it was Darnell. He cracks me up, and I can’t take him seriously. I’ve never seen a smile like his, and I don’t think I’ve ever met a funnier man than Darnell.”

Jefferies hung out with Mascoll and Josh Belk, the nucleus of a future Clemson defense.

“Justin and I have played together since middle school, but yes, all three of us together have a really good time,” he said. “We can’t wait to get on campus together.”

The trio spent time talking with running back Lyn-J Dixon and Tyson Campbell, the top two uncommitted prospects that were on hand but didn’t try to sway their decision.

No. The place speaks for itself,” Jefferies said. “Yesterday was all about fun and family.”

TigerNet asked Jefferies if the visit reaffirmed his choice to pick the Tigers, and he said no.

“I didn't need my reaffirmation,” he said. “I was blessed with 30 great programs willing to take a chance on me. But I knew from the first moment I put on that uniform that Clemson was where I was meant to be. It was the place God would fulfill the next chapter in my destiny.”

The highlight of the Cookout? Having his family with him.

“It was all so nice, but I would have to say having my immediate family that was with me enjoy the Clemson experience as much as me would be the best part,” he said.

And he already has a message for Clemson fans.

“I appreciate the people of Clemson so much,” Jefferies said. “No matter how far I'm blessed for this game to take me, I will never forget Clemson is where my signature became an autograph. The Clemson fans wanted my autograph before anywhere else. That will always drive me to prove myself worthy of that type of admiration.”