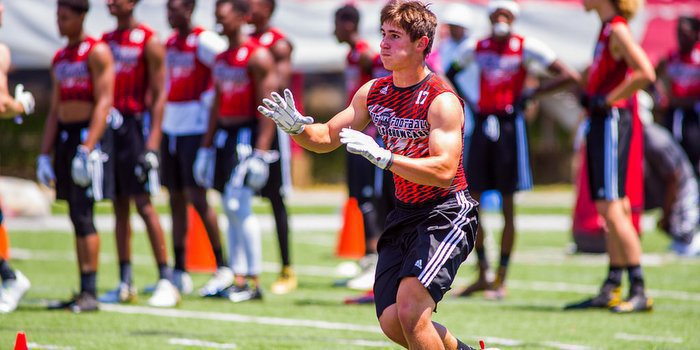 Swinney works out at a local camp last summer

Will Swinney has been a mainstay on Clemson’s sideline since his dad – head coach Dabo Swinney – took over in 2008, but next fall the younger Swinney won’t be wearing street clothes. He’ll be donning shoulder pads and an orange helmet.

The younger Swinney – much like his dad - has seen a lot of Clemson football, including losses at Wake Forest and a win over Alabama in the National Championship, and he’s looking forward to doing more than charting plays.

The last game Will attended as a fan and as the coach’s son is one he won’t soon forget.

“It was so amazing. We've been here since 2003, so our whole lives. I've really seen Clemson at its low and its high,” Will told TigerNet recently. “I just appreciate it that much more. I remember vividly after the Meineke Car Care Bowl and being up there in the hotel room and crying not knowing what was going to happen or if we were going to get to stay in Clemson. Now, six years later for us to be the national champs, it's crazy. The funny thing is that I've always done the touch chart for my dad and I went back and counted that was my 100th game.”

The senior Central (SC) Daniel athlete has accepted a preferred walk-on offer and will be enrolling at Clemson in June. While he’s known to fans as the head coach’s son, he’s seen by his peers, players, and coaches a football player, a role he wants to embrace fully. 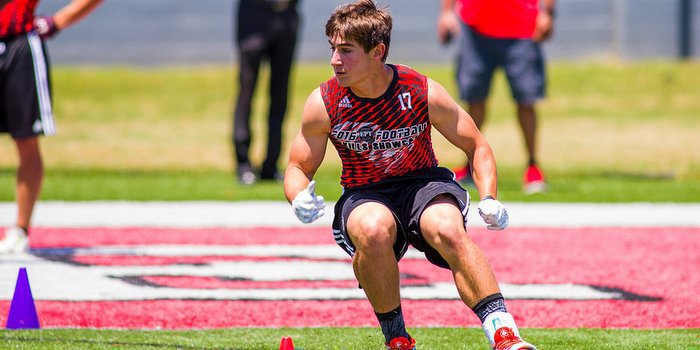 Swinney works out at a local camp last summer "

“I had some offers from schools like Newberry and interest from Western Carolina, Elon, and Gardner-Webb. I would consider the 1-AA schools because I wasn't sure if I wanted to go to an FCS school, but at the end of the day, I've always wanted to play for Clemson,” he said. “I think it's a great opportunity and I might as well just go for it.”

Inevitably, everyone wants to know how he’ll handle playing for his dad, and he said it’s really no big deal because he’s done it all his life.

“Obviously, that will be a question I'm asked a lot. I'm good friends with a lot of the players already, and I realize that when I'm up there, I'm just another player,” he said. “He has coached me in travel ball, so I'm used to it. This is a much bigger deal. He's still going to be my dad always and off the field that's how it is, but when we're up there in the offices that's my coach, and that's how I'll treat it.”

The 5-9, 175-pounder said he also plans to experience life as a student-athlete to the fullest.

“I'm going to be living in the dorm. I'm really excited about it because it just gives you a different perspective,” he said. “I've been around Clemson my whole life, but there are some of the school buildings that I don't know all that well. It's going to be awesome to start a new chapter in my life and get it from a whole different perspective.”

The younger Swinney played several roles on Daniel’s varsity team – wide receiver, cornerback, and special teams – but when he gets to Clemson, he just wants to help the Tigers win.

“I just want to do whatever I can to help the team win. I'm versatile. In high school, I played offense and defense. I played all special teams, also. I'll probably try to start out there first,” he said. “I also held on field goals for the past five years, so I might end up doing that. Just working hard on my craft at receiver, I think one of my advantages is that I'm very knowledgeable already and have good technique and if I just keep working and getting stronger and more explosive, I think I can improve and be a difference maker.”

Despite getting comparisons to Hunter Renfrow – who caught the game-winning touchdown pass in the national championship game Monday night – Swinney said he’s just looking to make a name for himself, not replace the former walk-on turned superstar.

“I've had a lot of people ask me that already. Hunter, what a guy. For him to have the national championship touchdown catch, it couldn't have happened to a better guy,” he said. “He deserves it so much. I'm not going to come in and try to be like him because there's not going to be another him. Everybody has to be their own person. I'm focused on being the best Will Swinney I can be. There are similarities, but at the end of the day, I have to be my own person. I'm just going to do what I do best and try to be the best I can be.”

With lots of wide receivers already on the depth chart, Swinney’s best chance at contributing might be on special teams, a role he’s already used to.

“There is a chance because Seth Ryan is leaving as the holder this year. It really doesn't matter to me either way,” he said. “Whatever the coaches feel like is best. Right now, I'm just training as hard as I can to put myself in the best position when I get there. However they decide I can help the team the best, I'm going to do.”