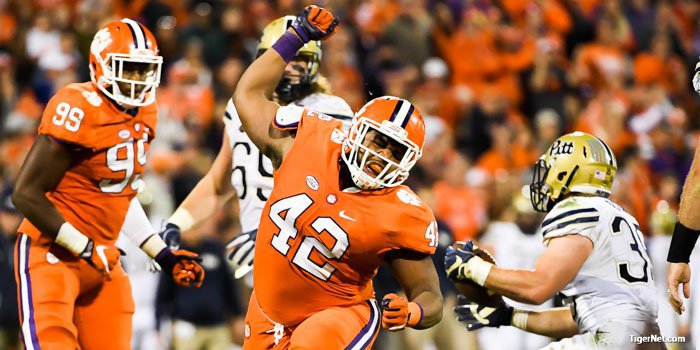 Wilkins says the fans need to get behind the new quarterback

CLEMSON – Christian Wilkins is one of the nation’s best defensive players, but that doesn’t mean he doesn’t appreciate the offense and he made a point Tuesday to tell fans that they need to support Kelly Bryant and the rest of the quarterbacks the same way they did Deshaun Watson.

Bryant will start Saturday’s season opener against Kent St., but backups Hunter Johnson and Zerrick Cooper are each expected to see playing time. Wilkins said the fans need to get behind whoever plays, but said he expects Bryant to surprise people.

"No doubts in my mind at all. He's my quarterback, him and Tucker (Israel) are the guys that came in with the 2015 class,” Wilkins said Tuesday. “I'm really excited and I have all and full faith in Kelly to get the job done. I'm really, really excited that he's our starter. I think if Clemson nation really gets behind Kelly or whoever the quarterback is through the course of the season, then he's going to do a great job. That's my challenge to Clemson nation and everybody else to just really be supportive. Give the same love No. 4 (Watson) had last year and the year before. I know it's going to have to be earned. I respect whoever our starting quarterback is because they're going to get it done."

Wilkins said he’s seen a different side to Bryant in fall camp.

Wilkins says the fans need to get behind the new quarterback"

Wilkins, Bryant and the rest of the Clemson team will face a Kent St. team Saturday, led by quarterback Nick Holley. The versatile Holley was a dual threat at quarterback. On the season, he threw for 868 yards and four touchdowns, while rushing for 920 yards and 10 TDs.

"We've faced some pretty good running quarterbacks. This quarterback is definitely pretty good and is pretty athletic,” Wilkins said. “I've seen him hurdle some guys and stiff arm guys all in one play so he's really athletic and their offense scheme is pretty simple except for the fact if we don't do what we have to do on defense, they have some fast guys on offense, they have like two track stars with speed and talent and they can get the job done."

"Definitely. You've got to be ready for pumps and just because he's shorter, he's really athletic,” he said. “Just because you get your hands up doesn't mean he's throwing the ball."

On comparing this defense to previous groups

What has he done to improve

"Really just my knowledge. I know a lot more about offenses now because really everything last year kind of slowed down and this year they'll slow down a lot more for me. Just the experience and things like that are really gonna help me."

Is he surprised with Logan Rudolph and Justin Foster?

On the potential of this team

"It starts with preparation. If we all put in the work on all phases of the game, especially on the special teams, offense and defense we'll all click. I think if we do that, we'll be clicking on all cylinders and be tough to beat. Really just understanding that each individual person has a job to do from the overall team success doing your job on both sides of the ball and special teams."