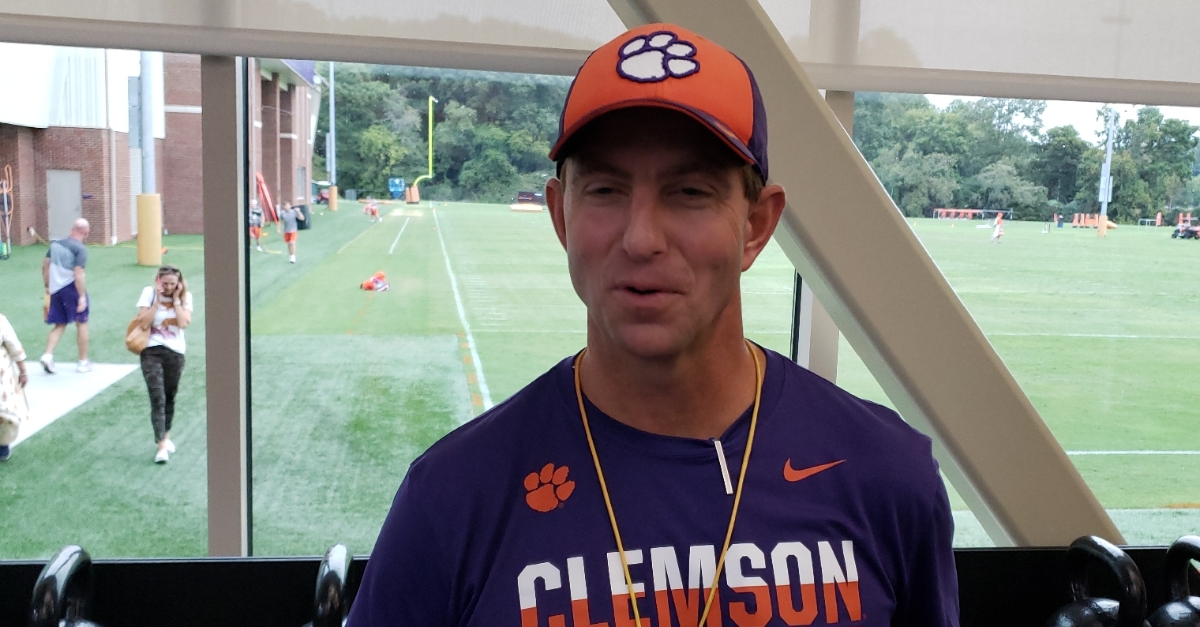 CLEMSON – Summer has released its humid hold on Clemson, at least temporarily.

The first hint of fall hit campus Wednesday afternoon and head coach Dabo Swinney moved his team back outside in preparation for this weekend’s game against Charlotte. Temperatures hovering in the mid-70s gave an early taste of autumn.

Following practice, wide receiver Amari Rodgers was spotted getting in extra work with the JUGS machine, eventually lying flat on his back and catching footballs as they zoomed over the top of his head. Swinney turned and watched for a few seconds before telling the media he tried the same thing Tuesday.

“I caught one lying back because they didn't think I could do it last night,” Swinney said. “I saw one and it went poof and I was like oh, and then I got the next one. It's like riding a bike. I think that's an Amari special for sure right there. But I have witnesses. That thing was smoking.”

The cooler weather put a little pep in everybody’s step.

“No question (it was like fall). Yesterday was blazing hot. In fact, I kept them inside yesterday because I knew it was going to turn cool and get a little cooler Saturday night, too,” Swinney said. “I was trying to juice them up. You know, you get a late night and it takes a couple of days after you get home at six in the morning. You kind of get out of whack a little bit. I thought yesterday was a good day for us. Good focus. But I did keep them inside and I think that kind of juiced them up a little bit. But today was just beautiful. Hopefully, we will keep that up. I am sure next week will be 100 again. Today was a good day. They had a good spirit to them. Good energy. We are getting the plan down and hopefully going to play our best game Saturday night. That is our plan.”

Swinney wants to see his team be more consistent.

“Just consistency. Offensively we are incredibly explosive but not as efficient as I would like us to be. Do a good job on third down and be efficient on first down,” Swinney said. “Defensively, let's make some of the tackles we've been missing. We should have had 12 sacks, literally, the other night and had eight. So just really continuing to get smarter and just show that we are applying the knowledge we've been getting.

“I saw it in the last game for sure. We are grading better. Our overall team grade has been trending up but it's not where it needs to be. When I look at our total number of winning performances and what that percentage is, that is something I pay attention to every week. Just seeing that number trend up and finish some plays that are there. We have a bunch of plays we haven't made, or we did make it and we have a penalty. That is really the main thing.”

*Corner Derion Kendrick was still sore (back) Monday and Tuesday but was "rocking and rolling today" according to Swinney. Offensive lineman Blake Vinson has a minor knee injury but Swinney thinks he will be ok.