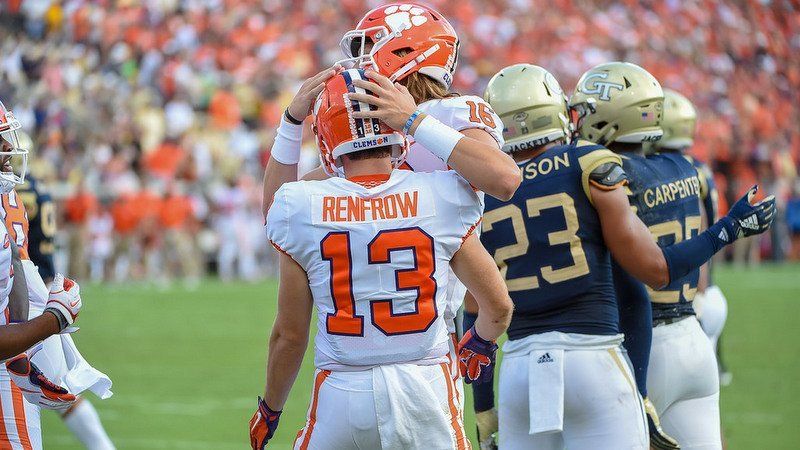 CLEMSON – Hunter Renfrow at quarterback? Another member of the team? Someone in the media?

Clemson head coach Dabo Swinney met with the media following Wednesday’s practice, and he said the news that quarterback Kelly Bryant has decided to transfer brought out every former quarterback on the roster.

“I did find that out today. That is one of the positives,” Swinney said. “I never had so many people come up to me and tell me what a great quarterback they were in high school and middle school. Lots of volunteers to make sure I knew what a tight spiral they threw and what a good 95-pound quarterback they were back in the day. Seems we have a lot of options based on the team meeting today.”

Swinney then asked if any media members had eligibility.

“That is where we are. We will go recruit. We are still in pretty good shape though,” Swinney said. “Chase Brice is ready to go play. We got two guys I know we can win with. And we got to get Ben back up to speed in a hurry. His role is fixing to have to change quickly. Then we work out all the other options we can. That’s just where we are.

“We have to move forward. We have to rally the troops. The guys have to do their job and they got back to work today. Chase will obviously move up to two, more reps for him. Ben Batson, good timing for him. At least that's a positive. He just got put back in practice this week (finger injury). We have to get him up to speed.”

For Saturday’s home game against Syracuse, wide receiver Hunter Renfrow might be the third-team quarterback.

“And then, (Hunter) Renfrow nation. We will get a plan together for Renfrow,” Swinney said. “He obviously knows everything, but we have to knock the rust off. He hasn't been back there ball handling and all of that, but he's a quick study and we will get him up to speed.

“Everybody talks about DK (Derion Kendrick), and obviously, DK played quarterback in high school. I think there might be a few things that we could do package-wise with him, but right now he doesn't know the whole system so that would be really hard and unfair for him. So we've got what we've got and we are excited about getting back out there on the field. We are going to move on. This will be about the guys that are here and are on this team.”

He then said that he hates some of the drama surrounding the decision falls on the shoulders of freshman Trevor Lawrence.

“I hate it for Trevor. He has done nothing but show up and go to work. His job is to be the best version of himself,” Swinney said. “He shouldn't apologize for being a great player. Just like when Deshaun (Watson) won the job. Deshaun hurt for Cole (Stoudt). I hurt for Cole. We had tears together. It was bad. But I am glad he hung in. He was MVP of the Russell Athletic Bowl. That is where we are.

“But I feel bad for Trevor. He started as a freshman in high school, for a reason. I said, I am sure there was probably an upperclassman, a junior or senior, that you probably beat out and I am sure there was drama with that. He told me that guy is now the starting tight end at Alabama. It comes with the territory. He is a great player. Nothing was ever promised him. He has earned it. He has had to earn it. That is what he has done. I am proud of him for doing what he needed to do, and if he hadn't earned it we wouldn't be having this conversation.”