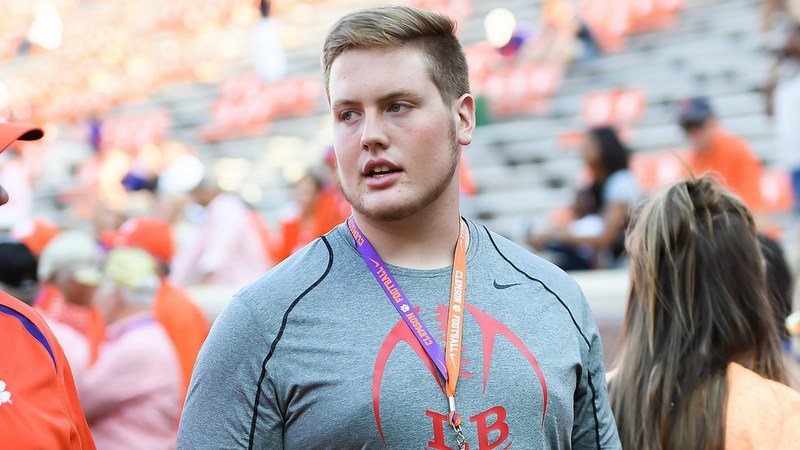 Jesse Hanson has been a fan of the Clemson Tigers since long before the College Football Playoff run and the 2016 National Championship, so when Robbie Caldwell offered him a scholarship Thursday afternoon, it was a dream come true.

Clemson opened the door within the last couple of months with an increase in communication and Caldwell made the offer during a swing through the state of Virginia.

“Coach Caldwell gave me the offer. Over the past month or so, Clemson went from sending me regular mail to handwritten notes and texts wanting me to talk to them and stuff like that,” Hanson told TigerNet Thursday night. “Coach Caldwell said he was coming to visit me and he came to my school today and told my coach that Clemson was offering. I talked to him after school about the offer.”

While Hanson won’t be reopening his recruitment anytime soon, to receive an offer from his childhood favorite Tigers was certainly a sense of accomplishment.

“That's awesome. For me, it's not as much about them being a playoff team and things like that,” Hanson said. “Obviously, that's huge for me because I've been a fan and watching that happen. When they played Ohio State, I had friends over for my birthday watching the game. It was on my birthday and I was like, 'Wow, this is a great present.' That's a big deal but from more of a fan perspective. For me, I've been a fan of Clemson since before they were a playoff team, so it's more of a dream and a work paid off thing.”

Hanson is certainly excited about the offer from Clemson, but he also knew the offer was a possibility when back when he decided to pledge to the Hokies.

“It definitely makes you think about things, but I definitely considered this before I committed, so it's not a new idea. It didn't blindside me. I'm just enjoying it at the moment,” he said.

However, if everything goes well, he may be making a visit to Clemson in July to the All In Cookout.

“I've been to Clemson many times. I came for a spring game and for the Florida State game,” he said. “For right now, I'm just kind of letting things be. I'm working out and concentrating on that. They did invite me to the All In Cookout this summer, so that would be the only thing that I'm considering. I had stopped all of my visits at this point because of my commitment.”