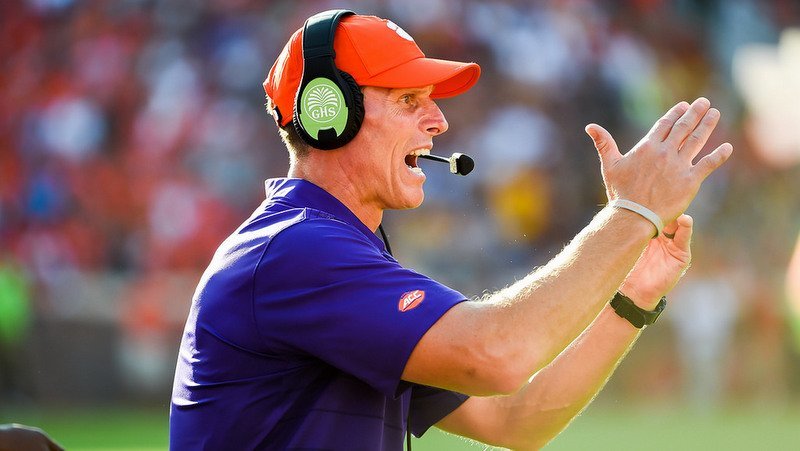 Two days later, his tone had not changed much. Words like asinine, ignorant and an abomination were used to describe some of the plays he saw last Saturday.

For Venables, the most frustrating part of the lack of execution against the Gamecocks was that the things that went wrong were simple things taught as far back as spring practice and fall camp.

“Our alignments were off, whether we were too deep or too wide, we didn’t have the kind of leverage that we needed to,” Venables said during his Monday meeting with the media. “That happened enough early to get them in a rhythm and get them in scoring position. I think pre-snap we did some stuff that gave us no chance. We’ve got a guy covering their fastest guy and we get caught flat-footed and we should never be caught flat-footed. Some of our alignments were asinine; I wish I had a megaphone, or unlimited timeouts because those are the things you saw from the sidelines.

"We had a cover 2 call and we don’t run with the seam route and Bentley finds him across the middle. This is week 12, those are basic and fundamental things that for some reason some guys were forgetting. Some guys played well and for 70 plays it looked damn good, but it was an abomination on those other 10 – 12 plays. They made some good plays, I have to give them credit, but one of those late touchdowns was just busted coverage over their best guy. Apparently, our guy says he had a different signal then everybody else and that’s discouraging.”

While there was plenty to learn from, Venables said he was pleased with several of tis players.

“Austin Bryant was our player of the game. If you look at grades and those types of things, #99 (Clelin Ferrell) played well, #42 (Christian Wilkins), #90 (Dexter Lawrence), and #67 (Albert Huggins) graded pretty good,” Venables said. “Can’t remember about Nyles (Pinckney) but our corners A.J. (Terrell) and Trayvon (Mullen) both played well. Kendall (Joesph) had a winning grade, but he turned a tight end loose on the first play of the second half and that’s 27 yards right down the middle of the field, can’t do that.”

While many have wondered how the defense will respond, Venables said they’ve come to work with the right attitude, but there are plenty of mistakes to correct.

“Our guys have been humble, and they’ve worked hard. We didn’t play well, and we didn’t coach well either. We did enough good things to win and we’re not sitting here tooting our own horn about it, but you got to have perspective,” he said. “Thank goodness our offense totally dominated the game from start to finish and we needed them. We weren’t executing our basic fundamentals. In particular, they had a little bunch set into the boundary and there’s no autonomy about whether you come under the block or do you go outside the block. Against every single team we play, every single practice we’re at, every drill we work, you’re outside your help is inside. We played so ignorant at times and it just made no sense. That’s ours and we have to own it and correct it.”

However, South Carolina is now in the rearview mirror as Clemson prepares for Pittsburgh in the ACC Championship to be played Saturday at 8 p.m. at Bank of America Stadium in Charlotte, North Carolina.

Venables said his defense will once again have their hands full with Pitt quarterback Kenny Pickett and the Panthers’ ground attack.

“Pickett’s a good football player, he’s tough, he’s instinctive, throws a good ball, mobile guy, plays with a good edge, and you can tell all those things just from tape; he’s a baller,” he said. “They have a very physical senior offensive line with a lot of experience, excellent receivers, and a couple good running backs that run the ball with power and speed. They had a setback down at Miami, but they’ve been playing some good football. They find ways to win and they win tight games; very aggressive and tough-minded team and that stems from who their head coach is.

“They run inside and outside zones, powers, counters, some option- oriented stuff, a lot of quarterback reads and designed runs, and again a good balance of speed and power. Few weeks ago, I think they ran for 500 yards against Virginia Tech, very good group of backs to go along with an experienced offensive line.”