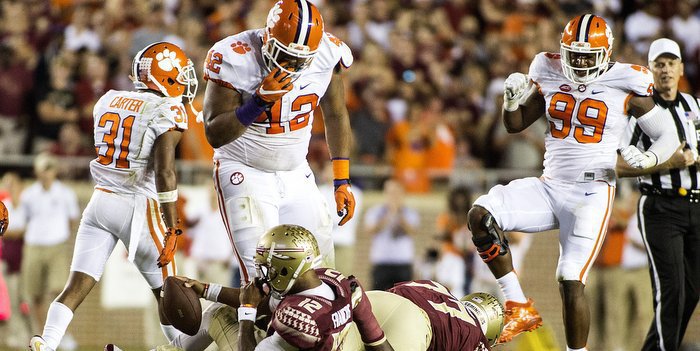 Christian Wilkins stands over Francois after a sack (Photo by Marina Vastola, USAT)

TALLAHASSEE, FL – Most defensive coordinators go into a prevent defense with the game on the line and the opponents needing big yardage to convert a first down. Not Brent Venables, who dialed up the pressure on FSU quarterback Deondre Francois on the Seminoles’ last drive of the game, pressure that resulted in two sacks of Francois and a Clemson win.

The Seminoles had quickly marched to the Clemson 34-yard line – getting close to field goal range for Seminole kicker Ricky Aguayo – and Venables said it was the job of the defense to knock Florida St. backwards.

“We needed to get them out of field goal range so our guys did a great job that last four plays by knocking them backwards. I thought our guys managed those last four plays and really played with their guts,” Venables said after the game. “They played incredibly hard and I’m real proud of our guys because they play so hard. We didn’t always play very smart. We helped them a little bit by giving them a couple jailbreak screens and put them in some tough calls in the first half and second quarter. Our guys played aggressive all night and we knew to have a chance to win we’d have to play aggressive and thankfully we played good enough when it counted the most.”

Florida St. roared back from an early 14-0 deficit, largely on the feet of standout junior running back Dalvin Cook, a player Venables will happily escort into the NFL.

Christian Wilkins stands over Francois after a sack (Photo by Marina Vastola, USAT)"

“Our guys are good up front and they are well coached,” Venables said. “They do a good job of getting off the blocks and beating guys one-on-one. We tried to keep pressure on as much as we could and try to mix it up, but guys did a great job of just getting off of blocks.

“You saw what happened when he had too much time. He’s really a good player and throws the ball with great accuracy so really that didn’t have a whole lot to do with it. We just knew that they’d probably throw something deep over the middle and have a chance if they completed it to kick a game winning field goal. We didn’t want to give them that opportunity. So were going to try to hurry on that 4thand 32 and didn’t want to give him a whole lot of time.”

Clemson was flagged nine times Saturday night, with the Clemson secondary receiving several iffy pass interference or holding calls. Venables declined to blame the officials however, and said the Tigers have to clean up their mistakes.

“I don’t know. We must get better and clean up our technique and that starts in practice,” he said. “You have to stress yourself and hold yourself accountable and quit whining and complaining. We have officials at every practice and we do it too much. We must get better that way. When you are guilty of it early, they are really going to be looking for it. When we are in phase and in position, we must do a better job of helping them out and coaching and correcting them. Syracuse probably leads the nation in plays per game and they are going to throw it all over the lot so we’re better than that. This game is all about the fundamentals and technique and we can’t leave those at the front door. We have to bring those with us every week.”

“I thought they allowed the game to be close. The two jailbreaks in the first half, that was not our guys’ fault, that’s on me. We just got too thick on the counter plays,” he said. “A year ago, they hit us on a counter play and it was a mental error. Then, those two counter plays on those one play scoring drives, part of you is mad as much as anything because our guys were playing hard, not mental errors.

“We just must play with better technique. Again, Dalvin is a good player, but if that happens it is always concerning. That can’t be a trend moving forward. Those 2 plays in particular, to a certain degree, you can live with. You hate that they were one-play drive touchdowns because that is a killer. Talking about on the road doing that? You really don’t deserve to win when you do that. Later, there were a couple plays in the run game where there were some mental errors and that’s disgusting. That can’t happen, but we came back. We played better at the end when we had to.”