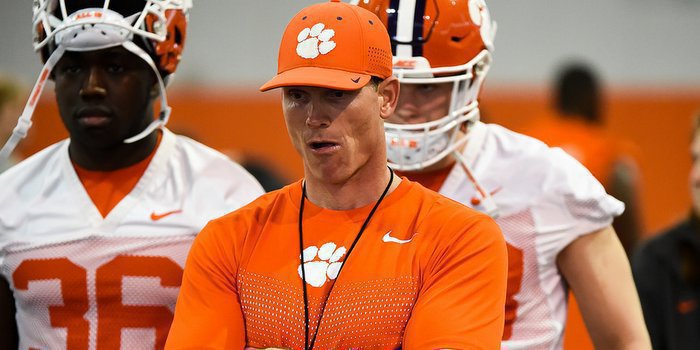 Venables coaching during an early practice

CLEMSON – Defensive coordinator Brent Venables isn’t ready to start publicly naming players who have caught his attention, but those who have proved to be consistent and dependable will begin to see an increase in reps starting with Friday’s practice.

The defending national champions have ten spring practices and two scrimmages under their belts, and when Venables met with the media in Memorial Stadium Wednesday evening, he said it’s been a mixed bag for his defense this spring, but he’s pleased with the progress.

“A few guys are banged up, so I was trying to limit their reps today and give some other guys some looks,” Venables said Wednesday. “It's good to get this film and coach off of it and correct it and grade it and start trying to reward guys with reps based on the overall percentages and playmaking and all of those things. It was good and bad and a little bit of ugly. We got a long way to go. It was a good effort. We’ve got to play smarter at times and tougher at times. Some other times we played smart, and we played tough. We've got a long way to go, but it has been a good ten practices now.

“It's been a really good ten practices. We are looking at a lot of different rotations and combinations of guys. We don't want to say that anyone is 'solidified' themselves. We haven't solidified the unit; it's a work in progress. I'm pleased with the progress we've made through 10 practices. When you go through a period like this is fall camp, the season or spring ball, there's going to be some plays or some days or drills that are good and some that are bad. You have to keep it all in perspective and keep fine-tuning things and keep sharpening and keep competing with each other and put them in stressful situations and experiment with some things.”

Replacing Jadar Johnson at safety and Cordrea Tankersley at corner have been two priorities for Venables and secondary coaches Mike Reed and Mickey Conn.

Venables said there are five guys at safety who are competing for playing time – Denzel Johnson, Tanner Muse, Van Smith, Isaiah Simmons and Korrin Wiggins – and a significant group at corner.

"I don't know. I would say that we've got five safeties that are trustworthy kind of guys. The corners, there is a group of them,” he said. “We have not figured everything out yet. We just let them keep competing. It's a good group, and Mark (Fields) has been banged up with a little turf toe. He played a little bit today, but we had to keep him out because he is a guy that needs to compete for a starting spot. With the safeties, it's been really pretty good. No cause for alarm right now at safety."

Ryan Carter has the most experience in the corner back group, but Venables said there are other guys who can make plays, too.

"Ryan can play both corners. He has settled in at either one; it just depends on who else comes along,” he said. “We have not played him much at Nickel or at safety this spring. We've been able to stay healthy, and we have some good young players that are taking those reps. It depends on who the other corner is, we know Marcus Edmond can play. (Trayvon) Mullen and (Mark) Fields can play too. We'll see how it all shakes out, but I bet you that it goes all the way into fall camp with that whole crew, which is good."

"He’s made a lot of strides. He's playing with cleaner, better technique, better positioning. He did a lot of things well early, and you got to win early at corner with the way we play, and then you've got to be a great finisher, too. He's been doing well. He understands things. He has a little bit more confidence, a better overall technique and knows when he can be in inside leverage and outside leverage, press-bail. I thought he had a really good true freshman year. We had a good team that won a national championship, I heard. I thought he played a lot.”

"Just being consistent. Not being Superman. When you know what you're doing and when you have experience, it lends to have confidence, and you're sure of yourself, and you show up a little quicker. You're in a little bit better position. You don't panic at the wrong times. You come to balance and play under control at the right times. All of the little things, detail wise. He jumped on a guy late and got a penalty, and we couldn't get off the field. You've got to be smart at times, too. He's doing well.”

"I have not been disappointed. I think there is another level that he is pushing for and working for and getting closer. He's done pretty well this spring. He had a few rough spots today."

"I think it'll be better. We got more, longer secondary guys to add to that mix. Then when you add Baylon Spector, who has done really well so far, and Logan Rudolph, big strong guys that are athletic and can run. They find the football. They play physical. They're smart, so they understand cross-face. They're some real rocket scientist guys. I've been really pleased with those guys, too."