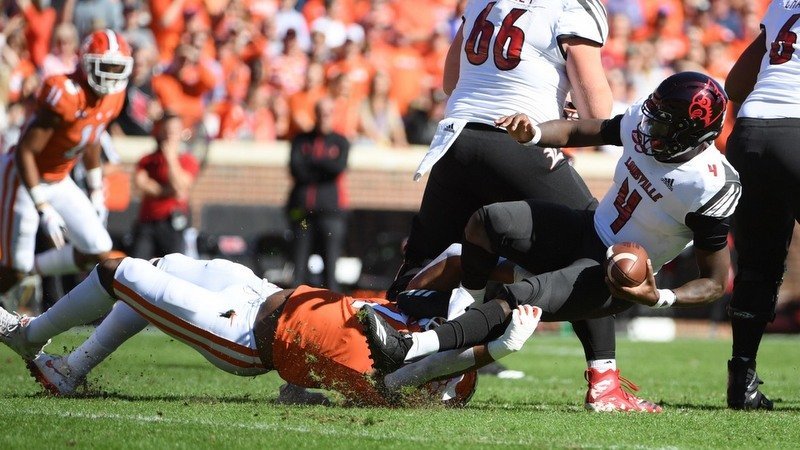 Austin Bryant gets a sack early against Louisville

CLEMSON – Brent Venables plopped down into a chair inside the Clemson interview room, a big smile on his face and a fruit smoothie in his right hand, and start looking ahead to Boston College.

No. 2 Clemson dominated Louisville 77-16 Saturday in Death Valley, and things were so lopsided that the Tigers went to their 665-pound "Fridge" package in the goal-line scenario, featuring 350-pound defensive tackle Dexter Lawrence as the fullback and 315-pound defensive tackle Christian Wilkins as the halfback. Last week, Wilkins recorded a touchdown run in a blowout win against FSU, and this week it was Lawrence powering his way across the goal line on a fullback dive.

Venables took a sip of his smoothie and said he still likes 42 – Wilkins – as the best ball carrier in that scenario because of Wilkins’ hips, but quickly turned serious when looking ahead to the Tigers’ trip to Chestnut Hill next weekend to face Boston College.

Clemson would clinch the ACC Atlantic with a win, while Boston College needs to defeat Virginia Tech Saturday, defeat Clemson and hope the Tigers stumble the next week against Duke.

Venables said the Tigers have to be wary of playing a hungry Boston College team.

“I do know we are going into the lion's den this weekend. It's time to get your nose bloodied this week,” Venables said. “That is a program we will face in Boston College that they know who they are and have a great identity. We are going to have to play with a great deal of physical toughness as well as mental. That is a program that plays with a tremendous amount of pride and they are very well-coached.”

Venables then said that he’s happy to be playing for something meaningful as the calendar turns to November.

“It's exciting to be in November and have a chance to play for a championship and to get in the drivers' seat this week,” he said. “We are thankful for that and our guys don't take it for granted. Our guys have worked extremely hard to put ourselves in this position, but that is what is in front of us right now. Everybody is looking at the College Football Playoff, but we are just looking to be the best in our division right now and we haven’t earned that yet.”

What makes playing on The Heights a challenge? Venables says it’s all about the way the Eagles play the game.

“I don't know. The players. The team. Their coaches. It's (their history) a long and storied and tradition-rich. Your past doesn't win for you, but it will be tough this week because they have a really good team,” Venables said. “They have players, they have skill, they have a good quarterback, a good offensive line and a good, powerful and explosive running game to go with the skill guys outside. They have done a great job of developing their program and Coach (Steve) Addazio is a tough guy that coaches a tough team and they play in a tough way. Going on the road, we are going to have to earn it. This is going to be a really challenging opportunity for our players.”