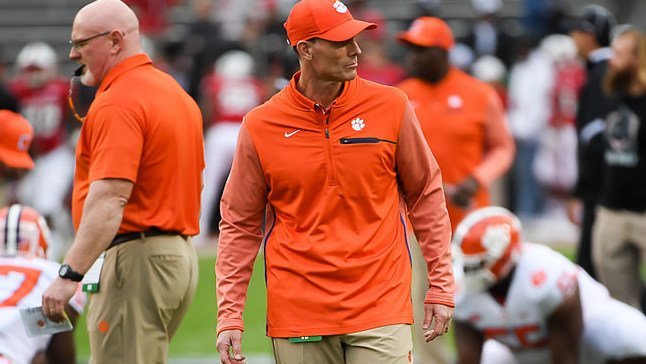 CLEMSON – Brent Venables is proud of his defensive line, and he thinks that publicity is good for the program. Just don’t expect him to rush out and buy the newest issue of Sports Illustrated that features the Tigers’ Power Rangers.

Venables spoke with the media Tuesday, his first interview session since the beginning of fall camp, and he appeared to be almost ambivalent about the cover.

"If you said would you rather them be on it or not, I would say not,” Venables said. “I'm not mad at them, it's not a big deal. Somebody actually just showed it to me right before I went into a meeting,” Venables said. “I'm not frustrated by it at all. I'm just like, 'So?' I'm not like, 'Someone get me a copy and see if they'll sign it.' They're great guys, man. I'm not going to act like they don't deserve being praised.

“They're hard-working dudes, man. Humble, confident, good leaders, and give us everything we ask them. That being said, I'd rather all that stuff not be done, but it's not their fault.”

Venables said that talented quartet works as hard as anybody else in the program – and is coached as hard.

"I think it's good for our program, but you've got to keep it in perspective,” he said. “I think they're a group of guys that can handle it. We coach them every bit as hard as we coach anybody on this team. And don't look the other way on anything. And don't cut 'em a break for anything. And they like it like that.

"If they were jerks, we'd quickly push them to the side or make an example of them. But for us, it's not hard to manage. They're very special.”

While Venables has plenty of experience and depth in the front seven, the secondary is thin in spots. AJ Terrell, Mark Fields, and Trayvon Mullen are vying for the cornerback spots, along with LeAnthony Williams. Isaiah Simmons moved from safety to Nickel-SAM, meaning freshmen Kyler McMichael and Mario Goodrich will be counted on to provide depth this season.

"I think both corners (Goodrich and McMichael) have had their moments where they've flashed and shown the ability to run and be physical and have some ball skills and awareness,” Venables said. “Very natural tracking the football. Good instincts. Really, their knowledge and how they pick things up - we do a lot - and it's been good. They're handling the tempo of practice. We've got two pass skels up, so if you have two pass skels (passing skeletons) going on at the same time, then a lot of people are getting a lot of reps, and it's not easy to do. That's not something we've done forever.

“When you don't have great depth, everybody is doubling down on their reps, which is a good thing in regards to their development but can be really challenging to being in shape and whatnot. And it's not easy to do. We'll see how it goes when they're tackling. But they've done well, really, really well.”

Many across the nation think the Tigers have a chance to be the country’s best defense, but don’t ask Venables to buy into that notion, just like you wouldn’t ask him to buy the Sports Illustrated.

"If somebody pulled a hammy, all of a sudden you're back to issues,” Venables said. “So, we'll see as we start tackling and competing here in a couple weeks and see how guys are able to sustain we're they're at.”