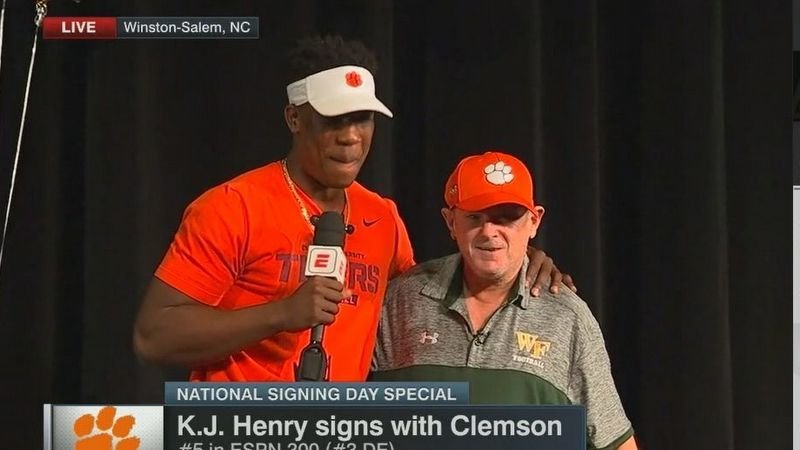 A popular phrase in the foothills of South Carolina says that a Clemson man needs no introduction. KJ Henry fits the definition of a Clemson gentleman to the proverbial tee, and that was never more evident than during Henry’s signing ceremony Wednesday afternoon at his high school.

If you doubted that Henry was a “Clemson kind of kid” before, you shouldn't have any doubts now.

Most high school prospects – especially the best ones – want to make their signing ceremony all about them. It’s their day, their time in the spotlight. Wednesday was Henry’s day, but instead of being the center of attention, Henry allowed a beloved coach to share the spotlight.

Henry chose to let one of his beloved assistant head coaches, Patrick Murphy, announce it with him. Murphy has had a mental disability since birth and has been a longtime fixture at West Forsyth High School for 26 years.

Murphy walked to the front of the auditorium, a huge smile on his face, and announced that Henry would be attending Clemson University as cheers erupted.

Henry said that he wanted “Murph” to share in the excitement.

“Just hearing everybody cheer made me realize I had made the right choice,” he said. “I let Coach take the spotlight, and that made me feel great. He has been so good to, and I loved his enthusiasm. It was his day. I wanted to make sure everybody around here and across the country got to meet Coach Murph.”

However, he had to wait until the last minute to tell Murph where he was headed.

“I told him he was going to be on TV and he couldn't keep that secret,” Henry said with a laugh. “I knew he wouldn’t keep the other a secret.”

Henry then said that he knows he made the right decision.

“For me, it was making sure my family was close and able to see me.,” he said. “And then another big one was how the coaches treated me throughout the process. Coach Swinney and his staff have been high-character, high-class guys. What you see in front of the cameras is the same thing behind it. I am looking forward to a great future.

“It feels good to be able to start this process and start college football. I am glad this is done. It is a weight off my shoulders. It is good to get this over.”

“Just a great family environment. The players are all from a great background. You very rarely of guys getting into trouble from Clemson,” Henry said. “I think that is because of the way they control things around there and making sure it's top-notch.”

Henry, from Winston-Salem, North Carolina, gives Clemson four ESPN 300 defensive line commits in the 2018 class, including five-star defensive end Xavier Thomas, the No. 3 overall prospect. He also considered Georgia, Virginia Tech and South Carolina and told the media he made his final choice only in the last week.

“I knew four or five days ago. I wasn't lying to you about that part,” Henry said. “There were a couple of different schools in my mind before this one. As I said, the consistency and being good to my family is what shot them to the top right there at the end.

The fact that defensive coordinator Brent Venables is remaining at Clemson also played a part in his decision.

“It went big-time into my decision,” he said. “You see changes with coaches and hearing him saying he was going to be solid to Clemson and that he was staying because his son was going to be there for the next four years was huge. The energy he brings to the game - he is definitely a guy who can turn me up.”