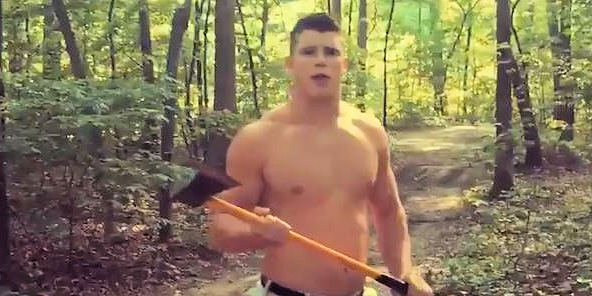 Rudolph made a big splash when he announced his commitment to Clemson in a tree cuttin’ (or chopping) video.

Clemson defensive coordinator Brent Venables made a splash during his introductory press conference in 2012 when he stated that it was “nut cuttin’ time” around the Clemson program. Late Friday, Logan Rudolph out of Rock Hill (SC) Northwestern made a big splash of his own when he announced his commitment to Clemson in a tree cuttin’ (or chopping) video.

Venables and Rudolph belong together, and the 2017 prospect will more than likely play linebacker – the position group Venables coaches – at Clemson.

We watched Rudolph at head coach Dabo Swinney’s camp last year, and despite working out at tight end and having the ability to play defensive end, Rudolph was recruited to play linebacker at Clemson.

His head coach at Northwestern says the Tigers are getting a hard-worker.

“I was his defensive line coach last year, so I have spent a year with him coaching him. Logan is a great kid. He's very loyal to the team. He's a team guy,” head coach David Pierce said. “I wouldn't say that he's not exuberant, but he shows emotion when he gets a sack or something like that. I wouldn't say that he's outspoken or a verbal leader. He normally leads by what he does. He's a hard worker. One thing that he brings is something we call a motor. His dedication. His get off the ball and the way he works is why he got there. It's the same way in the classroom. The kid attacks everything with gusto and a lot of passion.

“As a kid, he's a great kid. He's the worker. He's the one that will run through the brick wall for you because he doesn't know the wall hurts. He's the guys you want in the foxhole with you, whether it be in the classroom, at church, or on the football field. When we do our personality profiles, he's a musketeer. He's all for one and one for all. Clemson is getting a team guy, a guy who loves family and loves any type of situation that he can be in that revolves around family and being a strong team.”

Rudolph made a big splash when he announced his commitment to Clemson in a tree cuttin’ (or chopping) video. "

“I knew this was coming for the past couple of weeks,” he said. “He had boiled it down to three or four and he had made his list to the three. He had an idea of what he was doing a couple of weeks ago and made it official last night.”

What put the Tigers over the top for the linebacker?