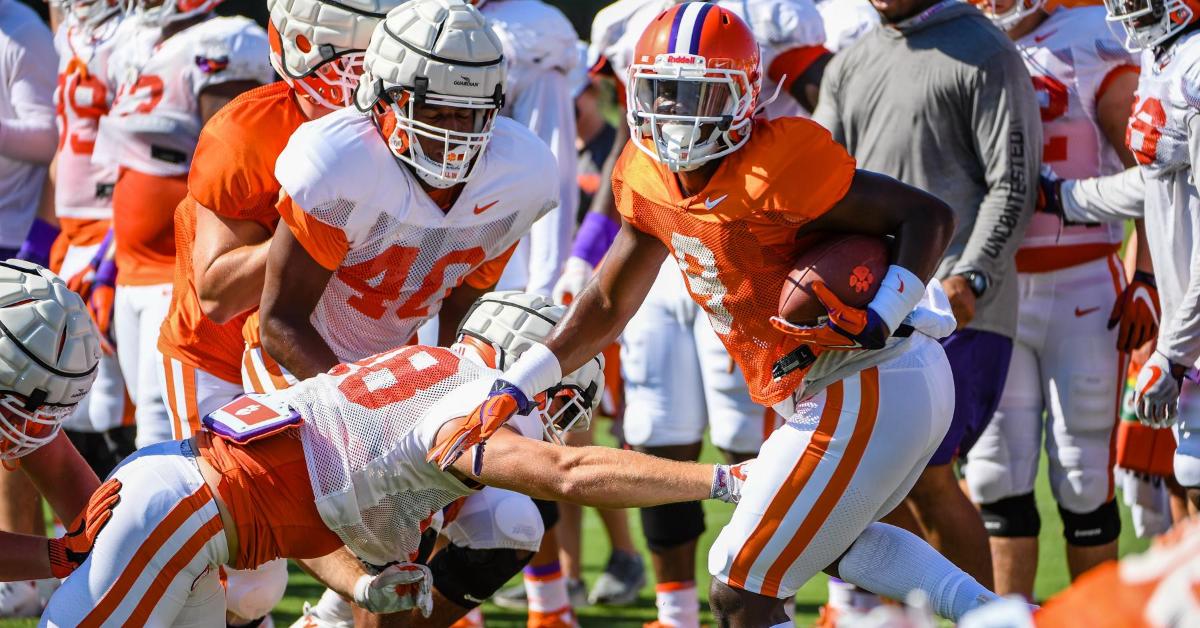 CLEMSON – Travis Etienne did a lot of things well last season but catching the ball out of the backfield and pass protection were two areas where he wanted to improve. To this point in fall camp, Etienne feels like he has taken his game to another level.

Raymond Priester is the all-time rushing leader in Clemson football history after rushing for a total of 3,966 yards in four years with the Tigers. James Davis leads Clemson in all-time rushing touchdowns with 47 in his career. Etienne has a chance to break both of those records in just three years as a Clemson Tigers. Etienne will need 1,543 yards rushing and 11 touchdowns this season to break those hallowed records.

The records, however, aren’t enough and Etienne told TigerNet last week that he wants to improve his overall game.

“It’s totally different now than I was freshman year. It’s crazy watching film from my freshman year and just going, ‘Wow, man I was that bad,’” Etienne said. “So, I definitely got much better at that. And, it’s a testament to Coach (Tony) Elliott and the way he works on us with that and the patience that he has with that because I definitely did a lot of things worse than now. Just the patience he had with me. So it just shows that we have the right coach for the job.”

With the departures of Tavien Feaster and Adam Choice, Etienne is now the old man in the room, along with veteran Darien Rencher.

“I just have to have that mindset to lead these guys and just help them out when I can,” Etienne said. “I kind of try to let them learn from my mistakes and have them not go down that same path. Just trying to give them tips and reminders and stuff like that so they can continue to improve.

“Coming into fall camp having a positive mindset and kind of knowing what to expect and just being the oldest in the group, trying to just lead by example.”

What has he seen out of freshmen Chez Mellusi and Mikey Dukes?

“Oh, I’ve seen a lot. Chez, he’s very explosive, and the sky’s the limit for him and also Mikey,” Etienne said. “He’s more like an elusive back, kind of a jump-around guy, he can catch the ball out of the backfield really good. So they complement each other well. Just fast and explosive. It just depends on how much work they put in the next couple of weeks of fall camp. Just keep grinding.”

“He’s definitely playing much faster out there, I mean he’s not hesitant with anything, he knows the playbook, the play calls, what to read,” Etienne said. “He’s just a totally different player than he was last year just playing the game within the game and playing faster than what he is.”

“Mikey, he’s a great talent. I mean he has a great mindset, he’s a quick learner, he picks it up really fast. He’s not afraid to ask questions and I kind of like that about him. Just his gameplay on the field I mean, he’s tremendous. He has that quick wiggle about him that kind of reminds me of Alvin (Kamara), just like the moves that he makes during plays and stuff like that, and in the way he runs and him being able to catch the ball so naturally out of the backfield.”

“Chez, he’s more of a power back, he just wants to put his head down and run somebody over, like that’s just his mindset. But he’s a great back, too. He has great hands, both of them have great hands. And when Chez gets going, the sky’s the limit for both of them.”