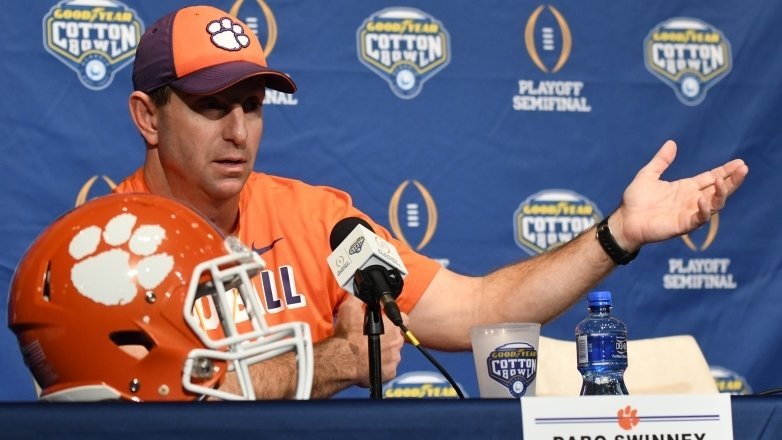 Swinney talks to the media Monday at AT&T Stadium

The Tigers practiced for the first time in the stadium where the Cotton Bowl will be held, but that news was overshadowed by head coach Dabo Swinney’s announcement that three players are – for now – suspended for the Dec. 29th game against Notre Dame.

“But, in this case, I think it's important, very important, that the message is accurate and that the truth is told because these are three great young men, three great young men, that I believe in and that I know, without a doubt, have not intentionally done anything to jeopardize their opportunity or this team. And I want to make that real clear before I even give you their names, because I know that's the story.”

“But the letter that came from the NCAA said that these three young men had a sliver, a trace of some substance called Ostarine. I have no idea what Ostarine is, O-s-t-a-r-i-n-e. But I have become almost an expert in it in the last three days. There's plenty of stuff y'all can look at. But I would be willing to bet that there's a likelihood that, if they tested all of us right now, we might all -- or some of us have something in our system that we have no idea how it got there -- a sliver, a trace, a fraction.

The Tigers are appealing the tests.

“So that's what we're in the process of doing. We're trying -- we're going to do everything we can to figure out if it is in the system,” Swinney said. “Heck, I don't know. I mean, who's to say that it is there? I mean, that's what we're being told, but there's -- they all will have legal representation, and there will be a process to go through to find out. But where we are right now is we got the three letters. And they have the -- this trace. And so the next step is there's a B sample. And the B sample, they will test that. And we probably won't know until Wednesday or Thursday on that. So we're just kind of at the mercy of the process. And then there's an appeal after that, but that doesn't really help with this game. Maybe it helps for next week or, you know, next year, whatever. But that's what we're dealing with right now.”

“But I want to be very clear that these guys, this is not street drugs. This is nothing like that.”

Swinney said the players didn’t do anything intentionally wrong.

“And, again, I don't know how -- if it even is in their system, how it got there. But I do know that these three young men have not intentionally done anything,” he said. “And there's, again, plenty of precedents where the same thing has happened across the country with other people. So, you know, there's a process in place. And we'll work through that. But, from a team standpoint, we have to get our team ready to play football. We got to get our team ready to play our best four quarters of the season. That's our goal. So we have to prepare as if it's an injury and get the next guy ready. And that's exactly what we're going to do. So that's -- I think it's just best, again, to be transparent and honest.

“Because I don't want there to be any speculation at all on what we're dealing with. That's exactly what we're dealing with. And I don't really know what else I can say about it other than I love all three of these guys. They're three special young people. And, again, I know they've not intentionally done anything. And, again, this is a hair of a trace of whatever this substance is. And so we'll deal with it accordingly, hope for the best, hope that the B sample will come back and they'll be cleared to play. But, if not, we treat it as an injury. We've got to get ready to move forward. And our goal has not changed, just to play the best four quarters of the season.”

Swinney said the coaches should know the outcome of the B Sample by Wednesday.