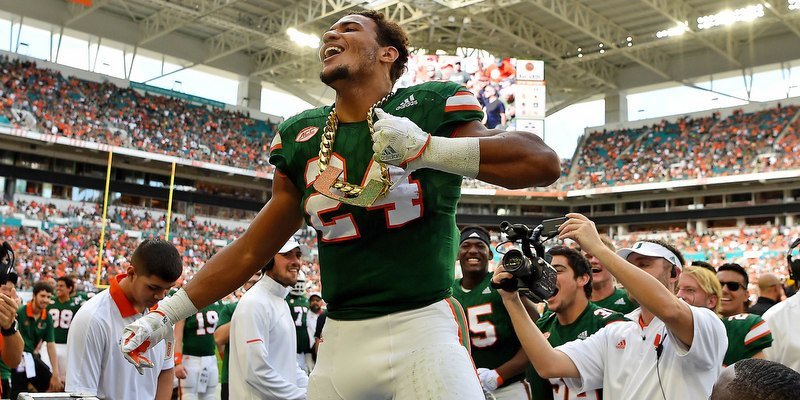 CLEMSON – Christian Wilkins isn’t afraid to show his emotions on the playing field, so he doesn’t mind Miami’s turnover chain. In fact, he kind of likes it.

Clemson and Miami face off Saturday in the ACC Championship Game in Charlotte, and the game will feature two of the nation’s best defenses. Clemson has the nation’s sixth-ranked defense, and while the Hurricanes are just 41st nationally in total defense, they are first nationally in turnover margin at plus-17 after forcing 29 turnovers this season.

Two weeks before the season started, Miami cornerbacks coach Mike Rumph asked Anthony John Machado, a local Miami jeweler, if he would make a rope chain players could wear after forcing a turnover. The chain contains a 36-inch, 2.5-kilogram, 10-karat gold chain, with 900 orange and green sapphire stones arranged in a "U" that is 6.5 inches wide and has gained national attention.

“I think it's good for them. You know, that's good for Miami. It's incentive to get turnovers and things like that,” Wilkins said. “It's pretty good for them and all that. But we hope they don't have many turnover chains this weekend going into the game. We want to make sure they keep those locked up somewhere. But they've done a good job for us in turnovers all year and everything like that, but hopefully, we're the team that comes out with more forced turnovers by the end of the game.”

Wide receiver Hunter Renfrow said the Clemson offense will pay extra attention to holding onto the football this week in practice but doesn’t think the Tigers will be too turnover-prone.

“Yeah, for us we've just got to be ourselves. We haven't watched too much of them yet with it being Monday, just coming off a big win against South Carolina,” Renfrow said. “Watched a little bit yesterday, and then watched them all season in big games. The biggest thing for us is really just taking care of the ball. I know they've got that chain, and they're looking for them. But really when we've gone on the road -- I know it's a neutral game, but when we have gone on the road and played well is when we don't turn the ball over, and I think that's something that we have to do. They're super talented, one of the best teams we've played all year for sure, and so we didn't give them and give their offense more chances to score than we need to. Just limiting turnovers, really.”

Quarterback Kelly Bryant says he likes the Tigers’ chances if they protect the ball, but he also knows the Hurricane defense presents a stiff challenge.

“You know, just each week, the coaches emphasize ball security for us. If we take care of the ball, we have a good chance to win at the end of the day,” Bryant said. “But just looking at the defense as a whole, they're a really talented bunch. Up front, they've got quite a few guys that are physical. They do a great job pass rushing, getting to the quarterback, and also playing the run and stopping it, as well. Their backers, they run sideline to sideline.

“We're good, as well, and they really come downhill and make plays out in space. Same thing goes to the back end, a bunch of guys that cover, do a good job making plays on the ball when it's in the air and making plays out in space, making sure they tackle. It's going to be a challenge for us, so we're just going to have to get ready, prepare. We're not going to do anything that we haven't done or anything all year preparation-wise, we're just going to treat it like every game we've treated this season so far.”