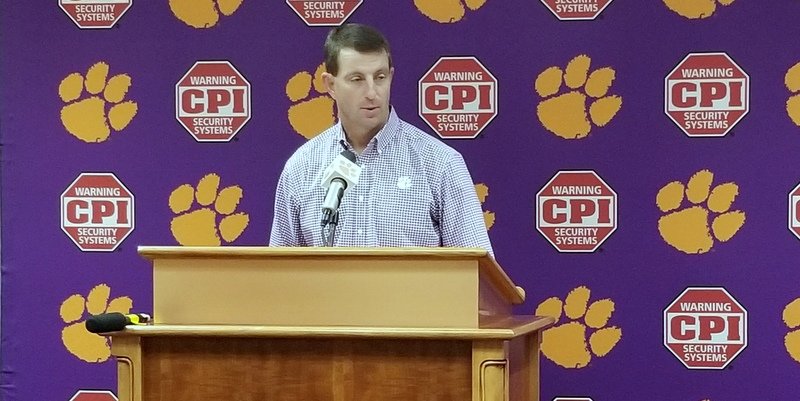 CLEMSON – There are still three games remaining on Clemson’s 2017 regular season slate, but Saturday’s four quarters will determine the season.

Playoff football continues for the Tigers as Florida State rolls into town and fourth-ranked Clemson looks to claim its third consecutive ACC Atlantic title. Head coach Dabo Swinney maintains that every game is the biggest game of the season, but Saturday’s 3:30 matchup really is the most important game of the season.

“It's unbelievable how fast the season has gone. Two more opportunities here at home,” Swinney said Tuesday during his weekly press conference. “This is where you hope to be. You work all year to put yourself in position to have a chance to achieve your goals. In 100 and something days now, we've only hit one goal and here we are down the home stretch and we've got an opportunity to do a lot. A lot of the rest of our season really hinges on these four quarters. This is championship football for us.”

Just because Florida State is 3-5, Swinney said this game is no different than if both teams were undefeated.

Swinney said you don’t have to look far beyond Florida State’s record to see that they have talent everywhere on the field.

“It's Clemson and Florida State. I know Jimbo is probably incredibly frustrated because they've had some tough games,” he said. “Their quarterback gets hurt and they've had a lot of injuries. They had three games come down to the last play of the game. Those things affect momentum and confidence. This is a very talented team. I know we've got a lot of people who keep up with recruiting rankings and we haven't won a battle yet. I don't think we've ever beaten Florida State in recruiting.”

Offensively, the Seminoles want to run the ball.

“They've got a bunch of cats that can play. They're big and strong and athletic. They've got speed everywhere,” he said. “These are the biggest wideouts. These guys are huge on the perimeter. The tight end is a very good player. The quarterback has gotten better. He's a young player. He's very talented. He can throw the ball down the field. They do a really good job formationing, creating a lot of opportunities downfield with some of their max protections. The biggest thing is they want to run the football. We've got to be able to win that matchup. This (Cam) Akers kid is a great back.”

Swinney said every week is important, but this week carries a little extra juice because of what’s at stake

“Now this one has some finality to it. It's really the same every week,” Swinney said. “Had we not taken care of business against Georgia Tech or Boston College or Wake, then we wouldn't be in this situation. That's why we say it's the biggest game of the year. If you don't have that focus, it's hard to get to this point. The only difference this week is if you can win it, you get handed a trophy. Every regular season game is important with the system that we have. It'll be the same intensity.

"It's Florida State. Their record has zero to do with their ability, their talent. You have to look beyond that. They had Miami at zero points at the half and Miami is one of the best teams in the country. This team has had some tough breaks. Don't just make that assessment by the scoreboard. We won just six games in 2010 but lost five games by less than six points. We were in every game. Sometimes you have some tough games that go your way and that can dictate the course of a season. They have a great staff and a great program. We just want to be the best version of Clemson, regardless. Clemson - Florida State is one of those big games, regardless. This is a good team that had N.C. State down to the wire, Louisville and Miami down to the last play. Dangerous team."

On if Dave Doeren called him about laptopgate

"No, no, no. He did not. Someone asked me about that the other night after the game. I had no clue. I knew the laptop had nothing to do with football. I did investigate and followed instructions to investigate. Turns out there was just a major crisis going on, a young guy helping a team in need. I think he was trying to get in touch with Amazon. We were in dire need of towels. We were trying to get some drones to come in and drop some towels on the sideline. Actually, I want to launch in investigation, too. What do they do with those towels? Is it a towel wall of fame?

"It's disappointing because that was a challenge to our integrity. You know, you turn on the tape and two years ago we go up there and one of their coaches pushes Deshaun Watson. This year they have a coach who takes a swipe at Kvon Wallace. What if K'Von breaks a finger? I think the investigation needs to be on how he manages his sideline. Not worried about ours. So no, didn't get a call. Didn't get a call. We need some towels."

"This game has decided the division every year we've been here. It's been Clemson - Florida State every year. One of us has been in the championship game. For us, again, it has come down to this game. It's no different for us. We have to beat them to win it. If we don't, well, they can deny us regardless of what their consequences are. It's good to be in a situation where you can control your own destiny. We know the type of team we are going to see."