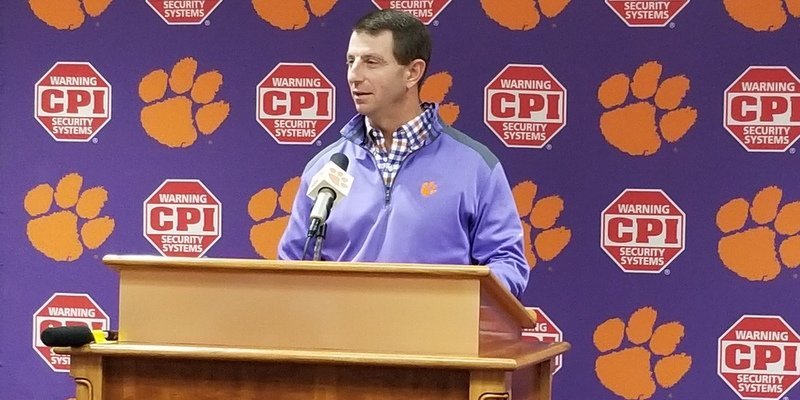 CLEMSON – Thanksgiving in the state of South Carolina means cooler weather, lots of food and time spent with family. It also means Clemson and South Carolina and the annual rivalry game.

No. 2 Clemson travels to Columbia to take on the Gamecocks (7:30 pm, ESPN) in a game that has playoff implications for the Tigers. The stakes are high, but Swinney wants to make sure his coaches and players get to enjoy the holiday.

“It's a lot of work and a lot of preparation,” Swinney said during his Tuesday press conference. “Obviously, we have to prepare and work on Thanksgiving, but we will make sure that we structure our week and our day on Thursday to where we can get our work done but also carve out a little time to give our coaches and players a chance to be thankful for all of their blessings.”

South Carolina is 8-3 overall, and Swinney says the Gamecocks are the sole focus of the Tigers.

“We've got the season, and then we've got South Carolina. It truly is a season of its own. For us, it's our next goal, and something we know is important to a lot of people in this state,” he said. “It's our total focus this week, and we are excited to head down there and take on a good South Carolina team. They have played well and gotten better as the year has gone. Will and his staff have done a great job of giving them the chance to win each week. They (the defense) are playing hard and with great effort and playing smart. They have done a good job of creating turnovers. A group that is playing with great chemistry. They are playing very hard and very physical. They are very rarely out of position.”

The Gamecocks are led offensively by quarterback Jake Bentley.

“Offensively, their quarterback is a very good player. He is a great competitor and has a great understanding of what they are trying to do and executing their offense and their run game and their passes off the run game,” Swinney said. “He has some craftiness to him. Time and time again on tape you think he is sacked, but somehow he breaks free. He finds guys on their scramble drill. He has a nice arm - made a nice throw on a post against Wofford last week. He is a quarterback and a great competitor. Offensive line-wise they are playing a lot better, and that is why they are 8-3. Again, I think that is year two with their coaching and getting some good chemistry and getting guys in the right spot. Their tight end, 81, is a good player and will play at the next level. They have some big receivers.

“We are looking forward to it. This is the week everybody talks about. Rivalries all across the country. It’s that time. It’s fun to be a part of it. Night game, down there, I am sure it will be a great crowd. Hopefully, we will play our best four quarters of the year this week.”

Clemson’s next win will be the 100th of Swinney’s career.

“It would be awesome (to get it this weekend). I remember my first win at Boston College and that was unbelievable,” Swinney said. “No way I was thinking about a hundreth win, I was just thinking about two. It's amazing, and it's a credit to all of the players that have come thru here. It's been an amazing journey. I just want to win the game and this team having an opportunity to continue on. Every week is playoff football. It's not about me or the hundredth win I just want to win the game and keep moving forward.”

“We are in a pretty good spot. I have a couple guys that we are still concerned about," Swinney said. "We won't know until Thursday probably. For the most part, we are as healthy as we've been for a while."

Tre Lamar (shoulder) and Chad Smith (re-injured his calf) are the two players that might not be ready to play this week according to Swinney.

"Doubtful. He's still not quite his full strength back from the stinger he had," Swinney said about Lamar. "He has made improvement, but I don't know if he will quite be ready to go bang on that (shoulder). Chad Smith is the only other guy that is questionable. He injured his calf on first kick off coverage (vs. Citadel)."

"Outside of that, everyone should be good to go."