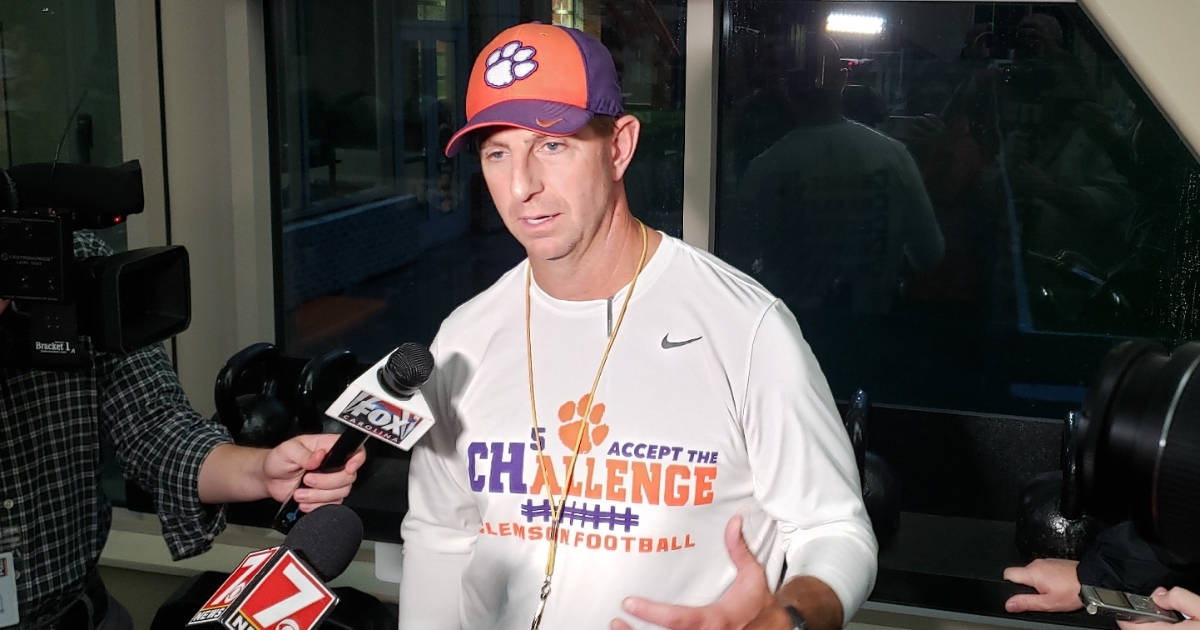 CLEMSON – For those who misunderstood Dabo Swinney’s stance on college athletes earning money in college and hoped that Swinney would leave Clemson and go do something else, think again. He’s not going anywhere.

The NCAA's top decision-makers voted unanimously Tuesday to start the process of modifying its rule to allow college athletes to profit from their names, images, and likenesses "in a manner consistent with the collegiate model."

“I’ll go do something else because there’s enough entitlement in this world as there is,” Swinney said at the time.

He doubled down earlier this year.

“Who knows what’s going to happen down the road? I have no idea,” Swinney said. “I just try to be great where my feet are. That’s my focus every day. Who knows? They may do away with college football in three years. There may be no college football. They may want to professionalize college athletics. Well, then, maybe I’ll go to the pros. If I’m going to coach pro football, I might as well do that. I may get a terrible president or a terrible AD one day. I don’t know. I have no idea what’s down the road. But I know what we have at Clemson is special, and I wanted to make a commitment to the university. That’s what the message of the contract was.”

However, the NCAA’s message was consistent in that it wants to keep the collegiate model, which means the school itself doesn’t pay players. The board directed the three separate divisions of the organization to immediately begin figuring out how to update their rules in a way that maintains a distinction between college and professional sports.

Following Wednesday’s practice, Swinney was asked about his comments – and the fact that many people misunderstood his “quitting” stance. He said he would love to see his players get extra money – as long as they keep the collegiate model.

“Nobody would ever do that. Nobody would ever do that,” Swinney told TigerNet. “I've always said that I'm against the professionalization of college athletics and the devaluing of education. That's what I've always said. If we professionalize college then I might as well coach the pros. I'm always for the value of education and the collegiate experience. I always have been and nothing has changed, but I've always said I am 100-percent for ways to modernize the collegiate model, modernize the scholarship.

“Love the fact we've got a stipend. Somebody said one time I was against it and I've never been against a stipend. I think the stipend should've been more as a matter of fact. I'm for all of those things.”

Swinney said the game itself and the players need for the collegiate model to be kept.

“I think it's a positive that there are going to be some conversations but I'm for the collegiate model. I'm 100-percent for the collegiate model and the value of education, that's never going to change with me,” Swinney said. “Our country needs that these kids need that for sure. I think there's a way to make it all work in a really positive way. Nobody really asked my opinion but if they ever did I'd be happy to share it with them.

“I think there are lots of ways that you can capitalize and make it better for everyone and keep it equitable and within the collegiate model. It's a very complicated thing but that's why you have some smart people who are getting together. Great conversation. I don't see anything negative about it all. As it sits right now, with no parameters, that's not good in my opinion. There's going to be some great discussion and great things that I think will come out of it that will be awesome for the student-athletes. We'll see what happens.”

He then said he hopes something positive can come from the new rules.

“I saw the release like everybody so I didn't know anything about it until after practice last night,” Swinney said. “Kind of like what I said a couple of weeks ago - hopeful that something positive can come from it. It's really created a great conversation. It sounds like they're going to get a group of smart people together and figure out what they need to do to address it but keep it within the collegiate model and value on education. That's really all I know but I think it's a good step. It sounds like they're serious about trying to get the right people in the room and figure out what's the parameters or best case to move forward.”

Swinney would also like to see the availability of funds tied into graduation – a player would get the funds as soon as they earn their degree.

“That's something I've said forever. I think the emphasis has to be on education,” he said. “I think that's a foundation of our country. I think if you devalue that it's a mistake. Whatever people come up with, there has to be some type of parameters. The thing I've always said is I wish there was a fund or whatever to where when you graduate you have an opportunity to get something. What that something is, I don't know. Smarter people can figure out what that is. I don't know. I just think it's going to be good. I think it's going to be a real positive because it's going to be really great conversation.

“It's already great and people who say it's not don't really understand the changes that have happened over the last five years, much less the last 20 years but it still can be a lot better. There are still so many things that I think can be better from travel to things for parents, an increase in the stipend. All of that stuff will eventually, they'll talk about anything and everything. It will be interesting to see how it all plays out over the next year or so. When it's all said and done, I think the collegiate model will be preserved and the student-athlete experience will be enhanced, which will be great.”