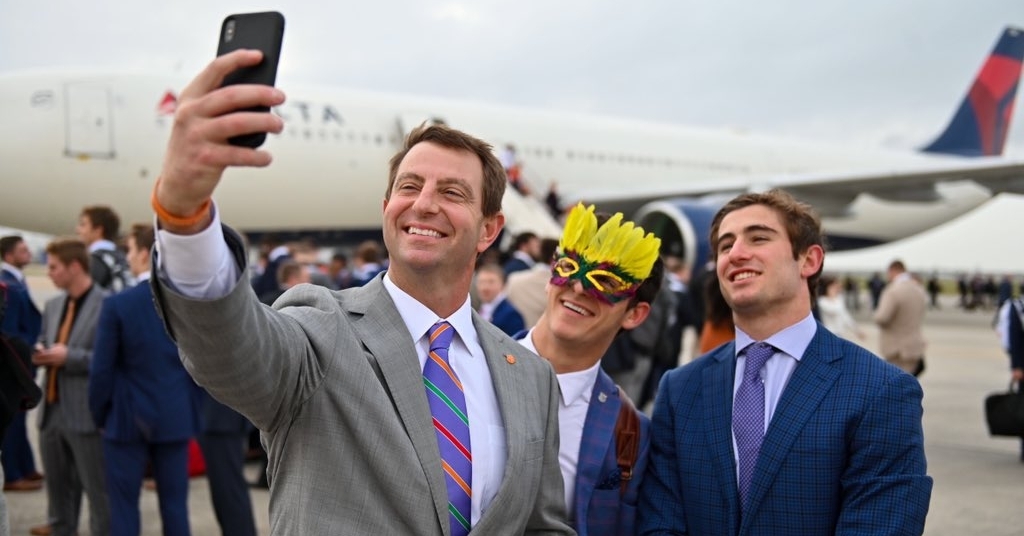 Swinney is hopeful that recruiting will get back to normal by the summer.

College football coaches, players, and recruits are stuck in a nationwide limbo as the country deals with social distancing, but Clemson head coach Dabo Swinney says not a lot has changed for the Tigers.

The NCAA suspended all in-person recruiting until at least April 15 in response to the coronavirus. March 1-April 14 was slated to be a “quiet period” per NCAA rules, meaning prospects could visit college campuses. With the current circumstances, coaches and recruits cannot have any in-person contact.

The good news is that the Clemson coaching staff managed to host two elite junior days and hosted multiple prospects over the last few months. That allowed Clemson to get a jump on other programs – like Ohio State – which doesn’t want to bring in prospects in the dead of winter to Columbus.

However, it does mean that Clemson can’t host the big recruiting weekend normally associated with the spring game.

“With a couple of weeks of spring ball left, we would typically have kids coming into practice and watching practice, and obviously the spring game is a big day for recruiting,” Swinney said Wednesday. “We would have had a lot of people on campus for that, so that’s gone away. But other than that, at Clemson, we don’t do official visits in the spring. That’s something that I know a lot of other schools do, but it’s just something that we choose not to do. So, that part is not really any different for us. Really just being able to interact with recruits on campus that have come unofficially, and certainly coming in for the spring game, that part is different.”

The next big date on the NCAA’s recruiting calendar is April 15-May 31 when coaches are allowed to evaluate prospects in person. The Clemson coaches usually take the month to see prospects at their schools – sometimes during that prospects spring practice – but Swinney isn’t sure that will happen.

“Who knows what’s going to happen,” Swinney said. “We’re supposed to be able to be on the road the month of May in recruiting. So, I don’t know if that’s going to happen. My guess would be probably not, so that part is different. You can’t talk to them anyway when you go on the road in May. It’s more evaluation, and coaches have always enjoyed being able to go and watch spring practice and just check – we have a lot of boxes that we have to check in our recruiting process. That’ll be a little different, so we’ll have to make sure we do a great job with our film evaluation and gathering all the academic data and so forth that we need to get.”

Swinney is hopeful that the nation recovers quickly, and prospects can return to campus in May. Until then, conversations will be forced to happen electronically.

“If the university opens back up in May, hopefully, people can come on campus. I don’t know, just have to see how all that goes,” Swinney said. “But we can still text all these guys. We can have conversations with them, they can call us and so forth. So, that’s what we’re doing.”

Swinney also holds his annual youth camps starting in June, with two weeks of high school camp providing the launch into summer. If the camp doesn’t happen, however, Swinney still loves the start of the 2021 recruiting class.

“We’re hopeful that we’ll be able to have our camps in the summer, but who knows,” Swinney said. “I don’t think any of us know anything right now, but we’ll just have to wait and see. I feel great about our 2021 class right now. We’ve got 10 commits right now. We’re off to a great start and very focused on the guys that we want to fill our last few spots with. So, we’re in a good place. So, just being creative with our staff and using the technology that’s available to us.”