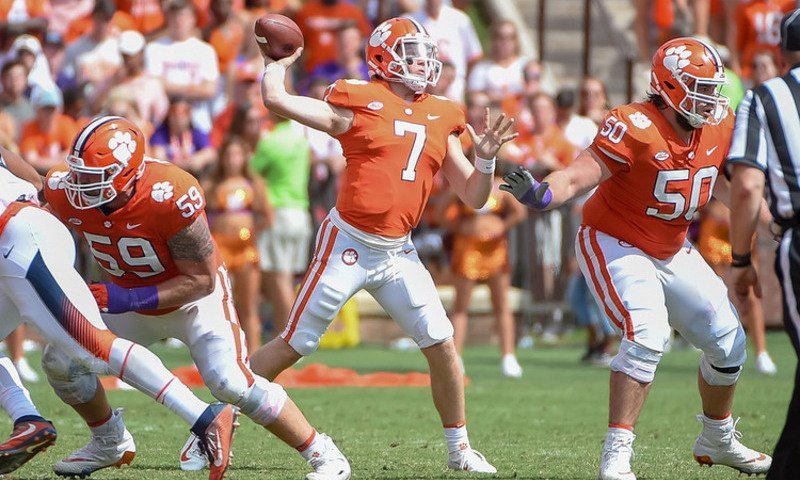 Brice was the hero in the win over Syracuse in 2018.

CLEMSON – Clemson head coach Dabo Swinney understands Chase Brice’s reasons for moving on, and he’s happy that his former quarterback will play for his good friend David Cutcliffe at Duke.

Brice announced last week that he plans to transfer to Duke, where he will be immediately eligible to play. Brice, who served as the backup to Trevor Lawrence the past two seasons plans to enroll at Duke in July after he graduates from Clemson. He will have two years of eligibility remaining.

In other words, the kid can play, and Swinney was happy to see Brice land in a good spot.

“Yeah, it was great. We spent a lot of time talking together,” Swinney said. “I called David (Cutcliffe). We talked about what the options were and just making sure we get in the right situation, the right spot. I love Chase. He’s been amazing and to me. Graduation should create opportunities and options for young people. So, that’s just the way it is, and you know he’s put the work in. And he came to Clemson and he achieved what he came here to do. And the fact that he’s gotten his degree created some other opportunities.

Swinney went on to say that Brice made the Clemson quarterback room the deepest in the league.

“I think we had the two best quarterbacks in the ACC on the same team last year. Just what I think,” Swinney said. “I think he’s that good. He was great, and especially how he handled it. Because I’m gonna tell you, Chase, he prepared every single week as if he was the starter. And he was into every play. Chase and I would talk a lot during games, and he’s very in tune with the game and very in tune with Trevor. He’s making suggestions, telling me what he sees and he was almost like a coach. But he was very in tune to what’s going on, and just such a selfless young man, so committed to his role and so prepared to go win the game.

“I think he probably played the most snaps of any backup in the country where the starter didn’t get hurt. So, he’s got a lot of tape and a lot of opportunities to play and develop. That was important to me for him to have that opportunity because he deserved it.”

Swinney said Brice didn’t begin a conversation about transferring until after the season.

“We never even talked about it. Never. I assumed maybe it would be something he would consider, but he wouldn’t even entertain the conversation. Ever,” Swinney said. “He’s just focused on what he was doing and this team, and being a great teammate, and being ready for his team. Once the season was over, he called me when we got back and we had a good talk about it. We met, and we talked about some options and kind of what we’re looking for and what he was looking for. I’m very, very happy that it worked out for him to go to Duke.”

Swinney thinks Cutcliffe will help Brice get to the next level.

“I called David. We had a great conversation. Coach Cut’s one of the best people I know,” Swinney said. “I mean, he’s one of the top two or three people that I would call for anything. And so, just ton of respect for him. Obviously, he’s got a great background with quarterbacks and so I think it’s a good fit. He’s got a couple of high school teammates up there. I think it’s a great opportunity for Chase and I’m super excited for him.”