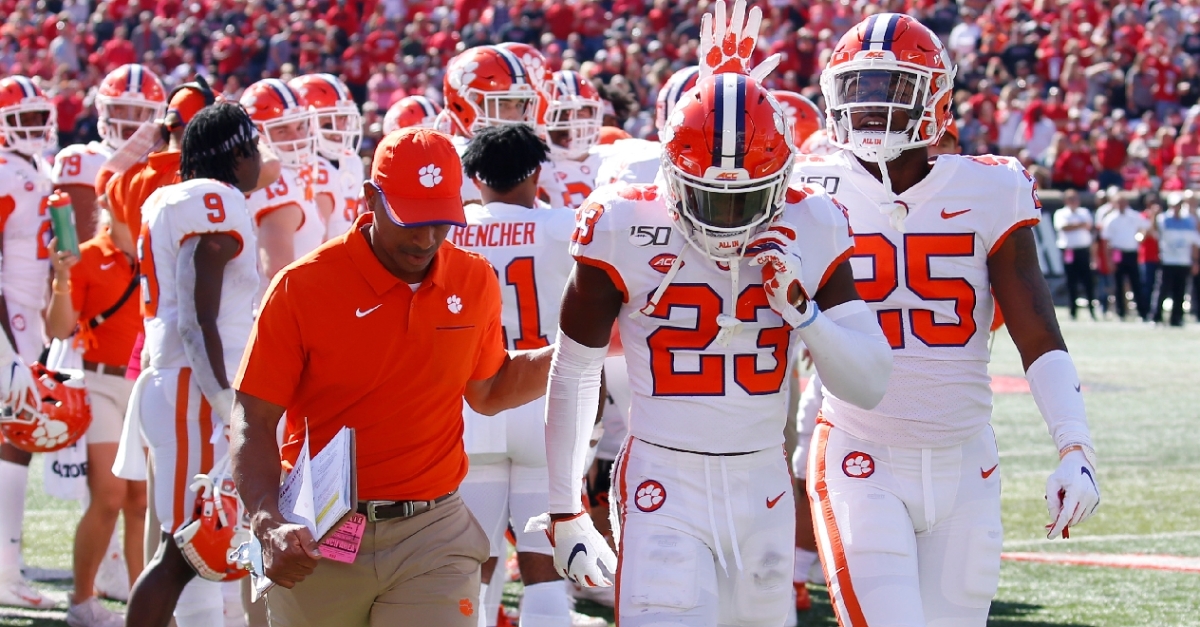 Andrew Booth had a long bus ride back to Clemson to Louisville to think about his actions.

Booth was ejected during the third quarter of Saturday’s 45-10 victory at Louisville for throwing a punch at the end of a punt return. As Louisville punted late in the third quarter, Booth became tangled with Cardinal defensive back Trenell Troutman. Booth wound up on top of Troutman and after some more shoving, he delivered a punch straight into Troutman's helmet. The blow led to a commotion with players from both teams forming a pile.

Booth was ejected by the officials, but not before head coach Dabo Swinney met him on the field and sent him to the locker room himself. Booth then didn’t get to take the plane home.

"I started by making him ride the bus home last night. He rode back on our manager bus,” Swinney said on his Sunday night teleconference. “That's where it started. The rest of it will be handled in-house. And he has responded well. He is disappointed in himself, embarrassed. He has apologized to our team and our AD. He's been extremely remorseful. What happened is way out of character for who he is. Very pleased with how he has taken ownership. He had a long bus ride home last night and plenty of time to think about it."

Booth will miss the first half of next Saturday’s home game against Boston College. The Tigers (7-0, 5-0) will host the Eagles next Saturday in a game televised by the ACC Network. Kickoff is set for 7:30 p.m. Clemson opened as a 35-point favorite after trouncing Louisville Saturday.

"I'm really proud of our guys. An awesome job,” Swinney said. “They were incredibly focused, ready and played hard. All across the board, the offensive line, Travis Etienne, just settled us. Trevor didn't have a good first quarter, but wow what a tremendous finish for him. He had a really bad first quarter, some bad decisions and missed opportunities.

"That's back to back great games from our offense. A bunch of guys touched the football. Six different guys scored touchdowns. Travis had 18 rushes and didn't play in the fourth quarter. The biggest thing was back to back weeks of a lot of yards after contact for Travis. I'm so proud of him. Same with Trevor. He averaged almost five yards a carry. We didn't have any drops. Our offensive line was physical; 17 knockdowns.”

Swinney said the good news is that there is still room to improve.

"Still, a lot of things we can do better. On the outside, it looks good, but for us, we have a lot of details that we can improve on,” Swinney said. “We have some individuals who can get better. We didn't execute at wideout very well in our screen game. We mishandled a clock situation right there before the half. But ... all in all, just a great job. Trevor, his leadership, toughness and response to adversity, just really good things.

"Defensively, a great effort. Tremendous effort. We held them to 263 yards. That's seven in a row where we've held teams to under 300 yards. The first time that has been done here since 1956. The stat of the game was 8-of-22 in passing. We had six sacks on them. We played the stretch well on the backside. Nyles Pinckney probably played his best game. We missed a bunch of tackles yesterday, 20-something tackles. Our alignments and fundamentals ... we're fast and athletic and overcome some of it but we have to improve in our discipline. We let the quarterback outside too many times. Too many mental errors.”

Despite the impressive victory, Clemson dropped to No. 4 in the AP Poll.

“Nothing surprises me. We won by 28.7 points per game last year after seven games,” Swinney said. “This year it's 28 points a game. That .7 is elusive. We're chasing that. We'll keep working. I don't really worry about any of that stuff. We just try to work our tails off to get better. Everybody can have whatever opinions they want. It doesn't matter. What matters is us closing out October in a strong way. We want to win this division and win this league. What happens after that, hopefully, we will be positioned well."