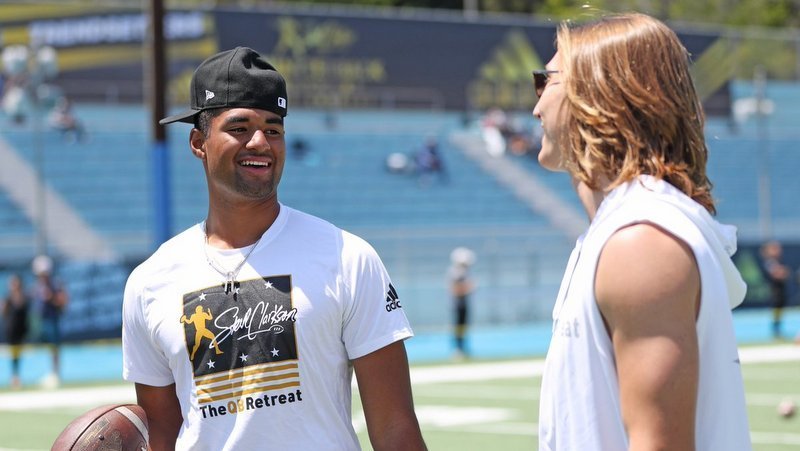 Uiagalelei (left) will have the chance to work with Trevor Lawrence this season.

DJ Uiagalelei has been on campus for about a month and quarterbacks coach Brandon Streeter has had the opportunity to see his newest recruit in action. His thoughts? Uiagalelei is the real deal.

The top quarterback in the country for the 2020 recruiting cycle, Uiagalelei is the next in line of Clemson’s outstanding quarterbacks, joining the ranks of Tajh Boyd, Deshaun Watson and Trevor Lawrence. Watson and Lawrence each led the Tigers to a national title while Boyd was the foundation stone for Clemson’s current run of excellence.

The California native passed for 4,225 yards and 48 touchdowns, with two interceptions, as a senior at St. John Bosco High while leading his team to a state title, and head coach Dabo Swinney said Uiagalelei reminds him of those other quarterbacks. Just bigger.

Streeter had the chance to work with Uiagalelei during Clemson’s preparations for LSU.

“Just an awesome kid character-wise. We have known that for a couple of years since we started recruiting him. He comes from a great family and he is the type of kid you really love to have,” Streeter said. “You have to love his size - he is a good 6-4, 245, and he is a kid that can move and he has incredible arm strength and the ability to throw the ball.

Moving from the Los Angeles area to Clemson can’t be easy – there has to be a bit of a culture shock – but Streeter said Uiagalelei is the type of young man that can make the transition.

“That is why he is here. We don't go out to California and just start recruiting kids unless they are a special fit,” Streeter said. “We figured that out pretty early with D.J. He has the ability to be a great fit for our program. He came in the summer for camp with his family and he couldn't have fit in any better. And he felt the same way about us. And that is the real deal right there when you have the fit on both ends. That is exactly what you want.”

“Just a special, special young man. All you have to know is that he is coming here from California,” Swinney said. “He knows that we have a guy named Trevor Lawrence that is going to be back next year. And we have a guy like Taisun Phommachanh. Just a very humble young man. No entitlement. No drama. Been committed a long time, and he told me that he knew the first time he came to Clemson is when he knew. He didn’t even go to the Elite 11 this year because he felt like it would take away from his team. That speaks to his focus, and he’s a very selfless young man. He is a breath of fresh air. He has a skillset that is unique. I bet you we have a packed house for the spring game to see him out there.”