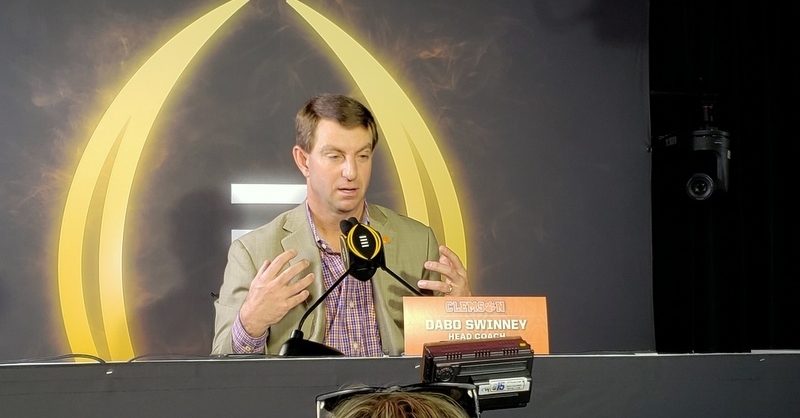 NEW ORLEANS, LA – Forty or so Clemson fans waited in the stands at the Xavier University Convocation Center Saturday morning, braving storms and the early hour to see their football team up close and personal. When the Tigers walked through the doors, cadence count began from the orange-clad faithful.

The short answer is that they are all ready to kick the ball off. The 16-day wait in between games is longer than they would have liked, even though it afforded the team the chance to heal up after a physical game against Ohio St., including wide receivers Justyn Ross and Tee Higgins.

“Are they 100 percent? As far as I know. Let me see,” head coach Dabo Swinney said. “Yeah, I mean, there's no practice problems or anything like that. Maybe their toe hurts or something. I don't know. I don't know if they woke up this morning with a bruise on their pinky.

“These guys heal up in two days nowadays. Yeah, they're fine. Higgins came back and played and Ross just landed on his shoulder, but they're good to go.”

*Some of the players embrace the attention, but center Sean Pollard is one who would rather go ahead and play the game. Pollard was walking laps around the facility, and Nikki asked him if he was staying on the move to avoid doing interviews.

*Clemson arrived at the airport Friday to a lot of fanfare – the team arrivals at the airport are always a good way to kick off the week – but LSU didn’t arrive by plane. They took a bus the 81 miles or so from Baton Rouge to New Orleans.

Everybody on the Clemson side understands it’s a home game for LSU.

“Oh, no question. I think we're the only one that took a plane here,” Swinney said. “So yeah, this is definitely a road game. This is what – the last one was a road game. You know, you go out to – it's a long way out there to Arizona, and that was a great football team, and we might as well have played – we could have just played it in Columbus and it would have made it a lot easier on everybody because it was probably about 80-20 and our fans are amazing, but Ohio State, what do they got, about 60,000 students? Got a lot of graduates, a lot of alumni all over the place, and we do, too, but we're a smaller school.

“So it's pretty cool. But yeah, this is – I mean, this is definitely a road game. It just worked out that way, and I mean, you don't know these things in advance, but I think it's really cool for LSU. How cool is that, for them to be able to just hop on a bus and ride up the road 40 minutes or so. It would be like us playing for the National Championship in Greenville, literally. Might as well have just played in Baton Rouge. No different. But maybe have better weather here in the Dome, so it'll be good. But yeah, it's no different.”

*One media member wanted Swinney to act like it was a big deal to coach against a Heisman winner, but Swinney cut him off in typical Dabo fashion.

“Listen, I don't get into all them awards that get voted on. I really don't. It's special for me to coach this team,” Swinney said. “It's special for me to coach these guys. I love competing against great competitors, so I don't – it's not special because he's the Heisman. It's special because he's a great competitor, and he's on a great football team. That's special. But yeah, I don't go, oh, my goodness, that guy is the Thorpe Award winner or whatever. I don't get into all that stuff.”

*A media report surfaced last week that quarterback Chase Brice would transfer after the season. Brice was asked about the report and he said no decision has been made and won’t be anytime soon. Brice won’t graduate until May, but then could transfer to the school of his choice as long as that school had a Masters’ program that offers a degree that Clemson doesn’t offer.

Brice told one media member that he is 100 percent focused on the game Monday night, and quarterbacks coach Brandon Streeter echoed those comments.

“We have not talked about anything with that just because we've been so focused on this awesome season that we've been having,” Streeter said. “He's been unbelievable, focused. I know there have been rumors about different things. He's said absolutely nothing. He's so locked in to what we're trying to accomplish here and he add so much value to this team that that conversation hasn't happened. He's done a great job of bouncing those questions off and answering them the right way and knowing that he can control where he's at right now. I'm fired up for him. He's got a great future here and he's done an unbelievable job since he's been here.”

“Those guys are great to watch, man. They're really fun to watch. But yeah, he's got his hands full,” Swinney said. “We call him (Venables) Vinny. He turns into Vinny on game day. Brent, really, if you're around him off the field, he is like one the sweetest people you'll ever meet. He just has this gentle spirit, got these two cute little daughters, and he's just so docile and kind and sweet, and then you walk on the practice field or a game field, and he turns into Vinny. It's fourth-and-1, every game everybody is out to get him. So that's just his mindset. He has done a good job of just keeping him corralled.”

*Freshman defensive tackle Tayquon Johnson is redshirting this season, but he’s made quite an impression on the offensive linemen. Johnson already squats 700 pounds and Gage Cervenka says Johnson is a run-stuffer who is hard to move off the line of scrimmage.

“Tua is special. He's one of the best quarterbacks we've seen come through the college ranks,” Swinney said. “Awesome person. I mean, just a phenomenal young man. I reached out to him when he got hurt and communicated with him a little bit. He's been so good for the game, just what he represents. Obviously didn't get to coach him, but I know full well what type of teammate he was and the type of leader, and Coach Saban has a great appreciation for that, as well, and the mark that he left on their program. But he impacted a lot of people through his platform at the University of Alabama playing quarterback. But from a talent standpoint, he's awesome. I mean, if I was in the NFL, I'd be taking Tua because he's a winner. He's a very savvy, smart, instinctive player. He's tough. He's got a great heart. He's going to make everybody else around him better. Those are qualities that you want to have in a quarterback. So, he's got a great future, and he'll up, get well, and he'll make a great player for somebody.”