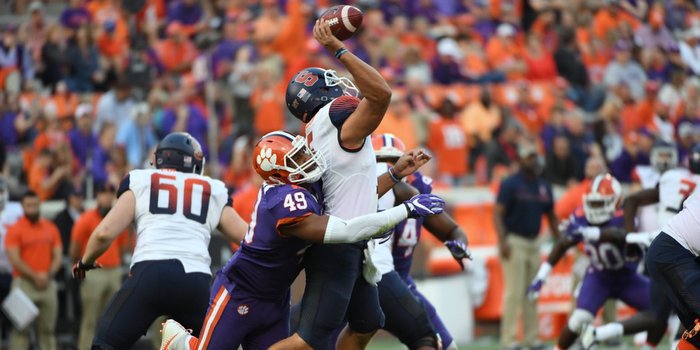 Tanner Muse has been trending upward, according to Venables

CLEMSON – Shutouts are becoming the norm under Brent Venables.

Clemson recorded its second shutout of the season and the fifth since Brent Venables became defensive coordinator in 2012 Saturday in its 54-0 rout of Syracuse. Three interceptions led the way as Clemson limited the Orange to just 277 total yards and 68 plays.

Venables was happy with the shutout.

“That was good. That's a tough scheme and a tough team to do it against. Everyone says in this day and age that this is hard and it's not easy to do. It really is hard and when you get one you really want to reward your guys and feel good about it. That was a great finish by all the guys that got a chance to get in there and play.

"I think our guys played well and I think we got them off schedule on early downs and that's typically needed to slow down up-tempo offenses,” Venables said after the game. “I feel like our guys had a little bit to do with it and met the challenge today. They were really physical and getting in to coverage. Guys did a great job of really communicating and just executing and understanding the plan. They played with great effort and we played a ton of guys. Obviously them losing their quarterback was not good for them, he's a terrific player, but I really thought our guys kept them off schedule. You saw tempo at times was definitely a problem but by and large our guys really settled in and again just executed well."

Clemson’s first touchdown was set up by an interception from Ryan Carter. 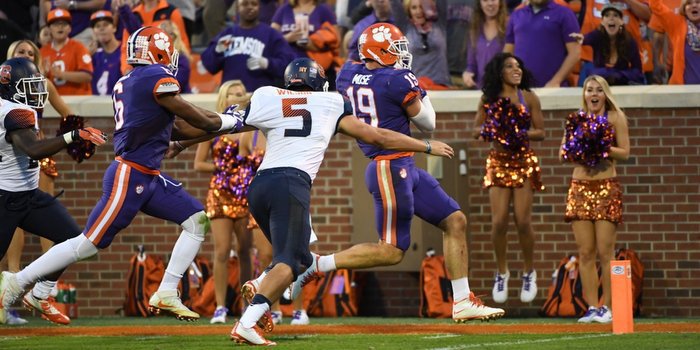 Tanner Muse has been trending upward, according to Venables"

"That was a big, did a nice job on the pitch play out on the perimeter and the pick play they're play faking with the RPOs and trying to draw them in and hit the slant route in behind him,” Venables said. “He looked like he baited him in to there and what a great play. Really kind of got us going there."

The most talked-about play of the day was linebacker Ben Boulware’s suplex tackle of a Syracuse receiver that drew a personal foul penalty.

"He did a great job, he really did. We have so much respect for Syracuse and their skill and their scheme, the quarterback. I thought Cordrea was really good. His feelings were hurt a little bit and his pride was hurt from a week ago, I don't think that's reflective of the player he is and he came back and had a great week of preparation and really focused and very determined to come out and play the way he did and played cleaner. He was in good position on those guys."

The job done by Tanner Muse

“This is no joke, but we say it daily and say it to our players, but Tanner has been a guy that you haven't seen on the field but has noticeable been doing this (points up). We did this with a number of our players this week because Tanner has been coming in, watching tape, coming in with all the right questions. He's really been in without having his lip stuck out because he hasn't seen the fruits of his labor, but then tonight he obviously got a chance to get in here and that play that you saw, he's done that a number of times in practice. My man knows what to do with the football, that dude right there can get it. He did that all the way through high school, and it's fun to see his hard work paying off. That particular play was a great play."

His thoughts on Jamie Skalski and Tre Lamar

"They were good. They were really good. Certainly not without error, but happy. Those guys invest and take the reps in practice and they don't get in as much and sometimes that can be discouraging and for them to stay positive and stay in there, that comes from leadership within the group and starts with Ben Boulware and Dorian O'Daniel and Kendall Joseph. Those guys, amongst others, helping those guys, encouraging those guys because they all have been there. They do it constantly with the young guys and they care how their teammates play. They want them to get in there and do well and be ready. They're in the locker room, Ben and those guys, holding court before they go in and a lot of those guys have gotten to play tonight, but they have to watch the reps. There's only so many reps in practice. Chad Smith and Judah and Skalski in particular, that was great for them. They looked like they knew what they were doing."