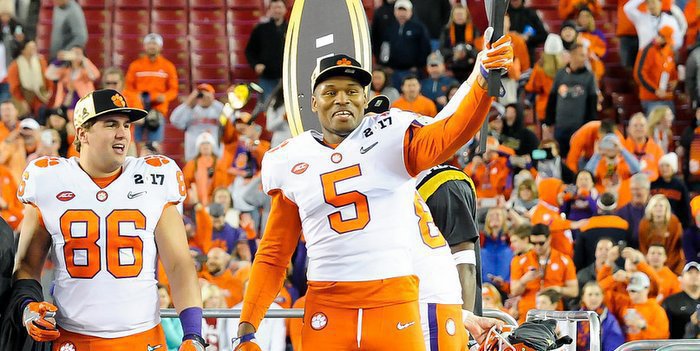 Five-stars don’t expect to redshirt, but freshman linebacker Shaq Smith has embraced the challenge and learned more than a few lessons along the way.

One of those lessons is patience.

Smith took everything he learned and made his way back into the Clemson fold, leaving Orlando and the all-star game and driving to Clemson to enroll in school last January. His early arrival, coupled with his impressive physical tools, led many to believe Smith would play right away, but the coaches took a look at the depth they had at linebacker and decided a redshirt would be beneficial in the long run.

“There was definitely a learning curve for me. It has been very helpful, and I am glad that I redshirted now. It helped me a lot being in the power hour every day and lifting while the players were meeting,” Smith told TigerNet in Tampa last week. “I am redshirting, but I am going against Deshaun Watson and Wayne Gallman and Jay Guillermo and guys like that every day. I am getting the best of both worlds. It has been helpful, and it has prepared me for my future.”

Smith said he'd learned more than one lesson, but one thing stands out above all others.

“Patience. Coming from the predicament, I've been in because I've always been labeled as one of the top guys and everything like that,” he said. “This redshirt year has taught me to be patient. Things don't always come when you want it, but they always come on time.”

“He had an unbelievable semester. Made a 3.75 GPA. One of the best guys we had in Power Hour,” Swinney said. “Great leader. Just a magnet for guys on this team and such an example of how you respond to whatever situation you are in. He took this opportunity to get better, and he has done that. Really, really proud of Shaq.”

Smith said he took it upon himself to be a team leader, even if he wasn’t playing on Saturdays

“It's a natural ability I have. I have always been a leader since I started playing ball,” he said. “It's kind of been a part of me. I want the best for the guys around me the same as I want the best for myself. So why not bring it out of those guys when I can.”

Smith also took advantage of having veterans like Ben Boulware and Kendall Joseph to help with questions.

“I used those guys as much as I can. I would text Ben on a Friday night at twelve o'clock, and tell him I was sitting at home with my playbook and that I had questions,” Smith said. “With Kendall, I will go to Kendall's house and sit down and write up notes and look at the Ipad. I've used those guys to my best advantage.”

Smith hopes to take all of his experiences and lessons and apply them to being the best player he can be this spring and next fall.

“That has been all season. For instance, the Louisville game. That was one of those moments where I was standing on the sidelines and it was like, wow, the stadium is rocking and it was a close game,” Smith said. “I can't wait to be a part of that. Getting that experience in Tampa and Arizona, it's a once in a lifetime experience. And I got to run down the hill for the first time against South Carolina, and it was amazing. I am ready to get out there now and show everybody what I can do.”