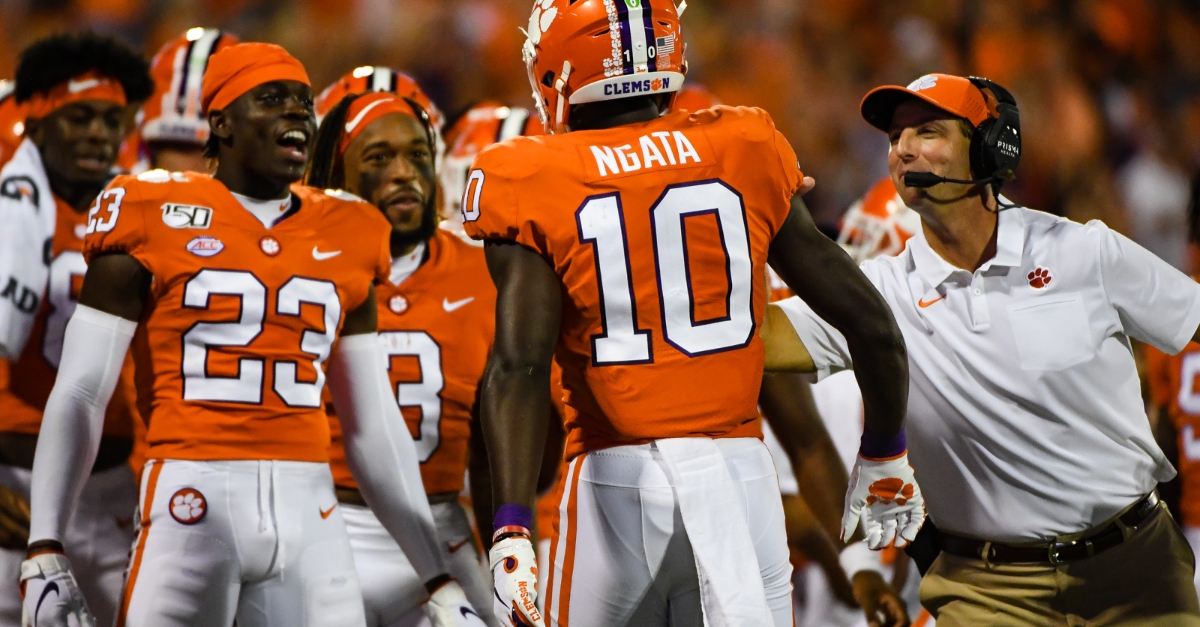 Joseph Ngata is one of four true freshmen to score a touchdown through four games.

Clemson dominated the action early and often in a 52-10 win over Charlotte.

TigerNet tackles week four for the No. 1 Tigers with the key takeaways and game grades.

What we know about Clemson football (week four)

* Following UNC’s win over Miami two weeks ago, and buoyed by the win over South Carolina a week earlier, the North Carolina student section chanted, “We want Clemson!!!”

Not only do they not want Clemson, it turns out they didn’t want Appalachian State.

The Tigers opened as 28.5-point favorites over the Tar Heels. The Tigers played an astounding 111 players in Saturday’s win over Charlotte, but ACC rules dictate only 72 players can dress out for this week’s game in Chapel Hill. They might play all 72.

The Tigers are 4-0 on the young season and it doesn’t seem as if they’ve broken much of a sweat, dispatching Georgia Tech, Syracuse and Charlotte with relative ease. Texas A&M provided more of a challenge, but it almost seems as if the Tigers were doing just enough to stay ahead in the early-season showdown.

The offense played better this week (more efficient) and began to substitute liberally early in the second quarter. Looking ahead at Clemson’s schedule, we can expect more of the same. Florida State, Louisville, and Boston College follow the UNC game and all of those programs have issues.

The good news? Clemson came out Saturday looking like a team that was focused solely on Clemson. The lack of competition is concerning, but as long as the Tigers take aim at Clemson and nothing else, they’ll continue to thrive. - David Hood 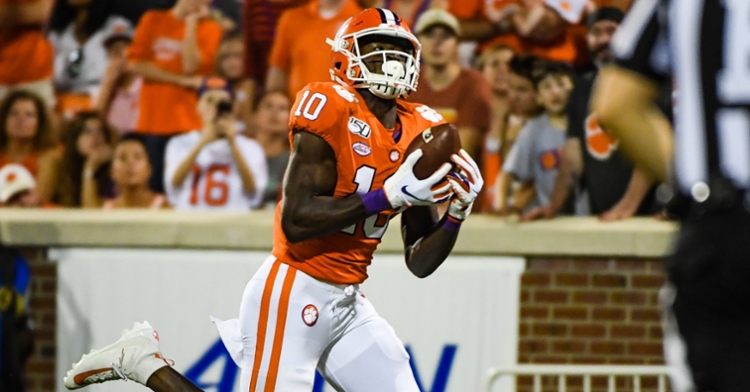 Joseph Ngata is one of four true freshmen to score a touchdown through four games."

* I’m not sure we learned all that much out of that performance -- which the Clemson coaching staff is probably just fine with going forward video-wise.

A colleague in the pressbox remarked that it resembled a spring game, which accounts for a nice offseason gathering in Memorial Stadium but not exactly a work of art on the field or analytically-rich. But despite 100-plus players seeing the field, the Tigers managed to once again outperform a ginormous Vegas spread in the 42-point win.

We take for granted the ease that some of these wins come, as they don’t just come that way for all Power 5 conference teams. Versus FBS non-P5 schools, Clemson has averaged a 33-point spread since 2015 and 39 points versus all non-P5 schools (Notre Dame included). The mentality instilled in the program shines through in games like this.

A lot of Tigers on the offensive side have not only gotten a touch -- but also a touchdown early, with 11 different players reaching the end zone (four being true freshmen in Michel Dukes, Chez Mellusi, Frank Ladson Jr. and Joseph Ngata) and 12-different being responsible for a TD (Chase Brice with two-TD passes).

Fourteen different Tigers caught a pass and 17 were targeted Saturday. Nine different Tigers carried the ball, including strong effort from Dukes (11.5 yards per carry, TD in four rushes) and Dixon (7.3 yards per carry, TD). Clemson’s trio of QBs with a pass attempt combined to complete 17-of-25 throws with the true freshman Taisun Phommachanh logging the lone pick on his third attempt and recovering to complete four of his final six passes for 47 yards.

On the defensive side, 27 Tigers registered a tackle, including a nice sack for true freshman Lannden Zanders. K.J. Henry continues to be disruptive versus the passing game, with two pass breakups.

Clemson continues to be positioned well for its big goals by its week-by-week domination, mixing in youth and keeping its star players healthy. - Brandon Rink

* Clemson did exactly what it was supposed to do against Charlotte, right down to covering the point spread in the 52-10 win over the 49ers.

When you play a game against an opponent that is overmatched from the outset, the best two things you can hope for is to get a win and come out of the game healthy. The Tigers not only got the win, they played so many players that nobody had the opportunity to get fatigued and then hurt.

Wide receiver Justyn Ross was on the sidelines – nursing a sore hip flexor – and a Clemson spokesman told the media in the press box a few minutes before kickoff that the coaches would like to hold Ross. He was available, but with UNC up this week, the ideal situation would be for Ross to rest and let the other receivers handle the load.

The closest Ross got to game action was waving a towel and celebrating all of the touchdowns with his teammates.

It was a perfect night in Death Valley, and the weather even cooperated. - Nikki Hood

Clemson won by six touchdowns in a game where Lawrence attempted nine passes and its 2018 leading receiver Ross rested on the sidelines. The depth of this group is on another level.

Venables sent out 41 players to take a snap on defense and allowed only one drive of over 30 yards and three plays of over 15 yards. They’ve been up for the task in each game thus far.

In a game all about the reserves seeing action, that extended to all areas of special teams as well, including kickoffs from B.T. Potter, Jonathan Weitz, Steven Sawicki and Aidan Swanson (in his season debut) holding Charlotte to 10 return yards. The revolving door at punt returner featured highs such as Amari Rodgers’ 20-yard return and a fumbled punt by Will Swinney.