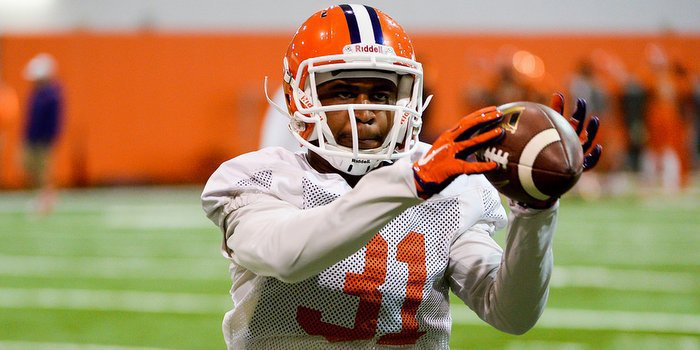 CLEMSON – Ryan Carter found out he was moving from cornerback to safety before the start of spring practice a few weeks ago, but the athletic Carter has not only accepted the challenge, he’s embraced it.

Carter totaled 20 tackles and a couple pass breakups over 233 snaps last season, mostly at corner and nickel. However, the Tigers lost three safeties following the loss to Alabama in the College Football National Championship – T.J. Green and Jayron Kearse elected to head to the NFL and Jefferie Gibson decided to transfer.

Those defections left senior Jadar Johnson and true sophomore Van Smith as the expected starters, with Tanner Muse coming off a redshirt season and Korrin Wiggins returning from a medical redshirt after suffering a torn ACL last August.

However, defensive coordinator Brent Venables likes what he’s seen out of Carter in the early part of the spring.

“He did a great job (at corner),” Venables said. “He can guard and cover at the field and boundary corner, and he got in and played well in nickel. Like anybody, he wasn't perfect. He can cover anybody. The neat thing about him is he has great versatility. He’s played safety (in high school). He looks very natural, and he looks like he has done it for forever. A lot of it is technique and patience, positioning. It’s speed and transitional movement. The thing that we’ve always liked about Ryan is he’s physical and plays big and likes to mix it up. It won't be unnatural for him.”

Carter said he will play wherever the coaches tell him to play.

“It's good. I got to play a lot of strong safety in high school, so the transition has been easier,” Carter said last week. “I also played some nickel, and when I'm playing strong, I can know what the nickel is doing. It helps me to know what the other guys are doing around me when I'm playing at strong safety. Today, I did some corner, but it's wherever I can fit in. I couldn't tell you, to be honest. I just try to come out and do whatever I'm asked of for the team. I don't really have a preference. I just want to get on the field anywhere I can. I played a lot of safety in high school, so I have a good feel for it. “

Venables said the scrimmages will tell if Carter can handle the physical nature of playing safety.

“We’ll see if he tackles anybody when we put pads on him,” said Venables. “That position roughly makes somewhere between 65-to-85 tackles in a particular season. If it’s by committee, 40 to 50. I feel really good. His knowledge is excellent. If he had a long way to go, it would show. We didn’t have anyone else to put there, and he was the only candidate here initially, and he’s looked really good there.”

“I like floating back and forth. I'm more of a physical guy, so I like tackling and stuff,” he said. “I like both of them. I like playing in the box because I like to tackle. Playing corner helps me with my footwork and technique. It's like being on an island and knowing that you really have to work your footwork.”

He also feels like his experience from last season can help the defense, no matter where he plays.

“Yes. I'm ready to step up and try to make plays for the defense the best way I can,” he said. “It definitely helped to get the experience from last year, but I feel like I'm ready to go and get more experience wherever I can.”