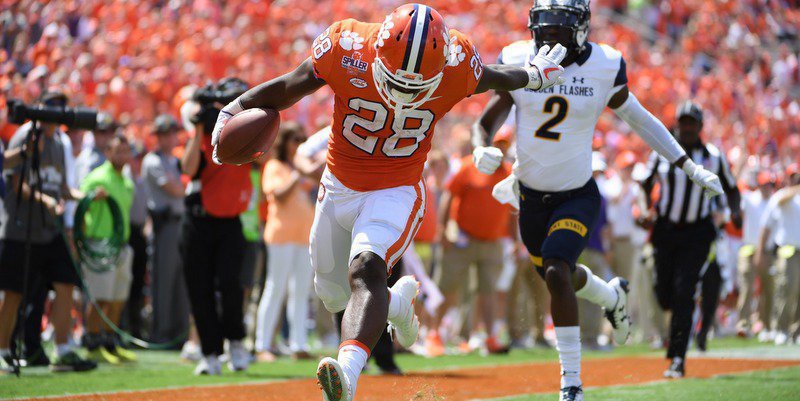 During the offseason, one of the big story lines for the Clemson offense focused on trying to replace talented running back Wayne Gallman.

It’s just one game, but it looks like the Tigers have some options. In a 56-3 win, Clemson had nine players carry the ball Saturday against Kent State and rolled up 353 rushing yards and six touchdowns.

The Tigers averaged 8.2 yards per carry and had five rushes for more than 20 yards.

“From my perspective, obviously, you see the big, explosive plays, but when I get on the film, I’ll be able to tell who’s using the eye discipline that I’m looking for and the pad leverage; who’s consistent in pass protection,” Clemson co-offensive coordinator and running backs coach Tony Elliott said. “But it’s good to see all those guys get in. They all made big plays. They all found the end zone. So that’s good for us because now we have some legitimate competition, and those guys are going to have to understand that it’s going to be won in practice every week to who’s going to get the carries.”

True freshman Travis Etienne led the way with 81 yards on eight carries, while Tavien Feaster had 69 yards on six carries and C.J. Fuller had 51 yards on seven carries.

Etienne had the longest run of the day at 54 yards and added a touchdown, while Feaster had a 47-yard scoring run, Fuller had two touchdowns and Adam Choice added a score.

“Since I’ve been here it hasn’t been a situation where I have three definite guys that can be the starter at any moment,” Elliott said. “And again, practice is going to determine that week to week, and then you have a young freshman coming in that’s catching everybody’s eyes.”

Etienne was a popular topic after the game following his strong performance in his Clemson debut.

“I’ve been saying that all throughout the course of fall camp that with the ball, he’s very, very special. He has a quickness, and he has unbelievable, what I say, eye-to-feet coordination in that his feet don’t have to stop to wait on his eyes to tell him where to go,” Elliott said. “He’s able to make that transition full speed, and you see how quick he was.

“Those first couple of carries, I had to get him on the phone and say, ‘Travis just calm down.’ He was like, ‘Yeah, Coach, I gotta get those jitters out.’ But once he calmed down, you could see that he attacks the line of scrimmage. Even though he’s not as big and physical as he’s going to be, he still hits it with a lot of authority, and I wanted him to finish off that one and not get caught. But I think as he gets comfortable, you’ll see him make plays.”