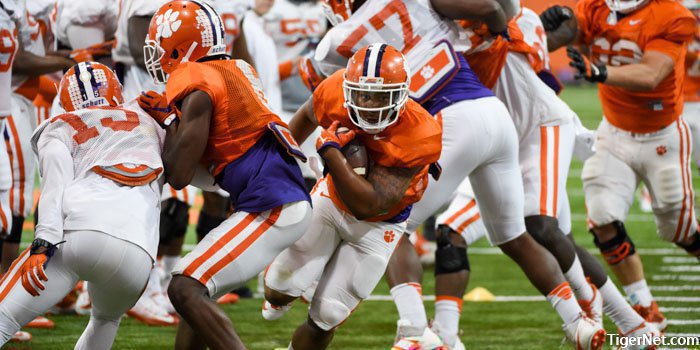 CLEMSON – Once Monday’s practice ends, only one practice will separate the Clemson football team from the annual spring game and the official end of spring practice, so head coach Dabo Swinney made sure Monday got off to a physical start. It was so physical that defensive tackle Albert Huggins ended an early confrontation with his jersey numbers hanging in tatters.

Former Clemson offensive coordinator and current University of Arizona head coach Rich Rodriguez was on hand to watch it all unfold.

Rodriguez coached at Clemson from 1999-2000 under former head coach Tommy Bowden, and has been the head coach of the Wildcats since 2012. He has a lake house nearby, and while he was checking on his property decided to drop in and check out the National Champions.

“They have a really good looking football team here,” Rodriguez told TigerNet. “The facilities they have are top notch, and it really doesn’t look the same as when I coached here. They are doing great things here, and Dabo and his staff have done a phenomenal job.”

Rodriguez was known for the phrase “spot the ball” during his time at Clemson, but it was Swinney who got things started Wednesday, and it began with a physical PAW (or Oklahoma) drill followed by a goal line confrontation between the offense and defense.

Here’s what we saw and heard: 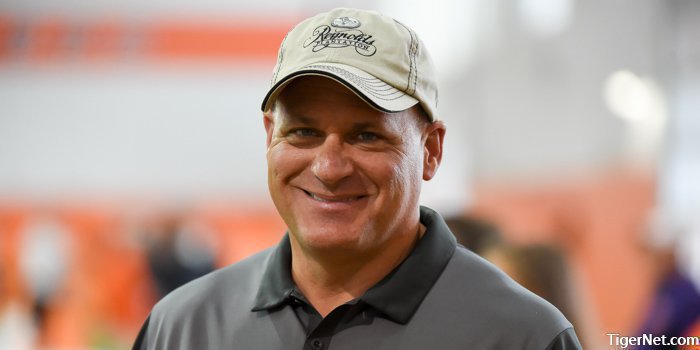 *During the drills, I was impressed with cornerback K’Von Wallace, who isn’t afraid to stick his nose in on a tackle. He’s physical, but tried to tackle running back Tavien Feaster up high on one tackle and drew the ire of safeties coach Mickey Conn.

Speaking of Conn – we really only get to see the quiet Conn during interview sessions, but he was fired up during Monday’s session.

*We haven’t heard a lot about linebacker Shaq Smith this spring, but he was front and center during the drills. He blasted through an offensive lineman on one play to hit Feaster, and on another threw a tight end to the ground with ease. His physical tools are undeniable.

*Cornerback Mark Fields was in yellow Monday afternoon as he continues to battle turf toe. Even though the practice was being held indoors, he could be seen walking the perimeter of the practice fields outside in the rain.

*Jalen Williams, who played quite a bit last season until suffering a hamstring injury, continues to improve. He was dominant during his reps of the PAW drill.

*Feaster looks to be running with most confidence he’s had since he’s been on campus. There were several times he made a jump cut or showed his shiftiness during the PAW drill. Adam Choice also looked like he’s finally confident and healthy again, running with power. And, don’t sleep on Darien Rencher. The T.L. Hanna graduate is shifty and can flat move.

*The running back that continues to impress me is C.J. Fuller. We’ve known that Fuller doesn’t mind running in between the tackles, but he made a couple of jump cuts Monday that showed he can stick his foot in the ground and change direction without losing a lot of speed. I haven’t really seen that side of him before, and it reminded me that Clemson’s coaches continue to do a fantastic job of identifying and developing talent. Remember – a lot of schools thought Fuller would be a defensive back on this level, but now he has a chance to start in the backfield for the defending champs.

*We were able to watch a period of special teams drills and while today wasn’t a great measuring stick on the punting competition because it wasindoors, there’s no doubt the competition at punter is going to run well into fall camp. Will Spiers and Carson King battled it out for the first part of practice. Both have plenty of distance and King clanged one off of the high beams of the indoor practice facility. Spiers was also the holder for field goals.

*Ray-Ray McCloud, Hunter Renfrow and Amir Trapp all worked at punt return. McCloud, of course has the explosiveness. Renfrow would remind you of Adam Humphries with his sure-handedness. Trapp is showing some promise in the return game.

*Once the PAW drill finished, Swinney screamed, “One play to win the National Championship!” That drew cheers from the players, and the first-team offense went against the first-team defense at the goal line with the ball spotted at around the two-yard line. 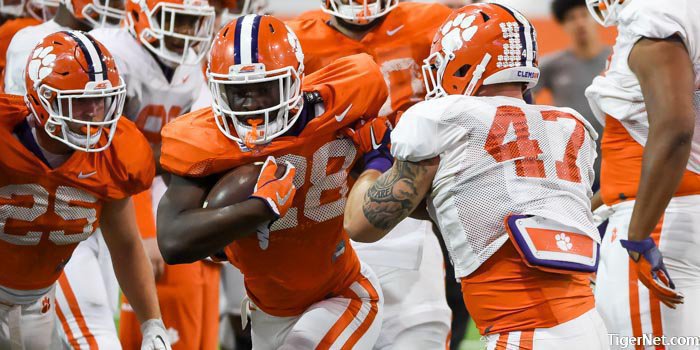 Tavien Feaster breaks through on a drill

Kelly Bryant and Fuller were on the field with the ones, along with tight end Milan Richard. On defense, the move we’ve been expecting looks to be unfolding. Former middle linebacker Kendall Joseph was at the WILL linebacker spot occupied by Ben Boulware last year, and Tre Lamar was at the MIKE. Tanner Muse was at safety, and we saw Ryan Carter at the one corner spot on the field.

That brought in the second-team units, with Zerrick Cooper at quarterback and Tavien Feaster at running back, while Shadell Bell was at tight end. On defense, the defensive line was Richard Yeargin, Albert Huggins, Sterling Johnson and Chris Register. Feaster scored on the play, bowling over linebacker J.D. Davis on his way to the goal line.

Swinney brought the first-team units back out, and Choice tried to score up the middle but was stopped at the line of scrimmage by the defensive line and Joseph. Christian Wilkins and Richard had a little extra curricular pushing and shoving while Clelin Ferrell celebrated.

I’ll say this – this defensive line is going to incredible. In fact, the whole defense is going to be salty. One observer who was there – and has been around the team for a long time – said he thinks this has a chance to be Brent Venables’ best defense and that if the coaches can find a game manager at quarterback, this team has a chance to be among the nation’s best.

*Marietta (GA) 2018 four-star defensive end Azeez Ojulari was at practice, and he was being shown around by recruiting assistant Tyler Clements. He has offers from Oklahoma, N.C. State, Georgia Tech, Georgia State and Appalachian St.