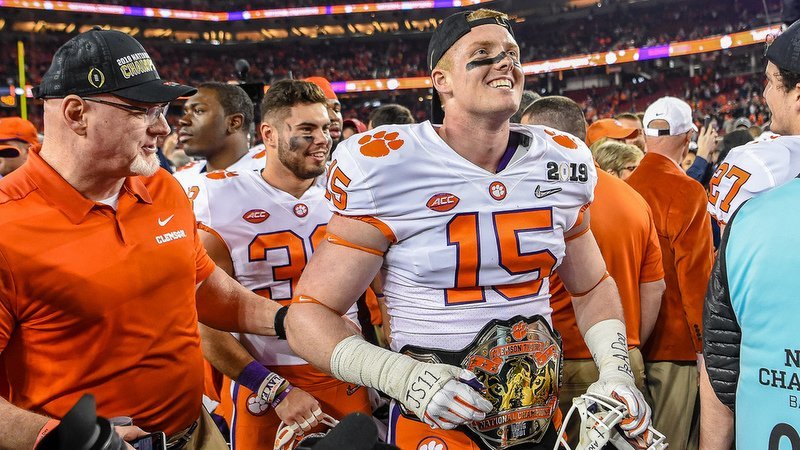 Jake Venables smiles after the win over Alabama

Clemson defensive coordinator Brent Venables is one of the most intense coaches in the country, and his son wants to match that intensity.

Freshman linebacker Jake Venables redshirted last season but was credited with two tackles in six snaps over two games. The younger Venables made one tackle in his collegiate debut vs. No. 16 NC State and added a tackle against Duke later in the season.

Playing two games was part of a beneficial redshirt season.

“That was probably the best part,” Venables told TigerNet. “But this redshirt year has been a great learning experience for me. I got to learn the playbook, and I got my first semester of classes under my belt. But Power Hour is probably one of the greatest things I could have done, so I am pretty happy with that. I worked on my overall strength. I ran a 4.6 (40-yard dash) over the summer, so I thought I needed to get stronger and get in the weight room, so that's what I did.

“The biggest thing I have worked on is change of direction because that's something we work on and do drills on in practice.”

Taking the field in Death Valley in a game situation was the highlight.

“It was pretty surreal,” he said. “The NC State game, I had no idea that we would get in, so I was pretty nervous when they told me. I was like alright, let's go. I am hoping next year I can get into the rotation, and the following year is probably the same, just trying to work my way into a starting role over my last two or three years.”

Venables said he is aware of the alter ego of “Vinny” that head coach Dabo Swinney has for Brent Venables, the mild-mannered dad turning into a beast during games, but he enjoyed every second of being with the man he calls dad and coach.

“It was everything I expected it to be. He's a great coach, great dad, and it's been going well so far,” Venables said. “He is definitely a different person (at work than he is at home). When I was younger, and I would see him on the sidelines, I couldn't really look at him or look him in the eye. Because when he's in that mode, he's somebody else. But I am kind of used to it now. Everybody gives me a hard time, but I try to match his intensity on the sidelines, so it's been pretty interesting.”