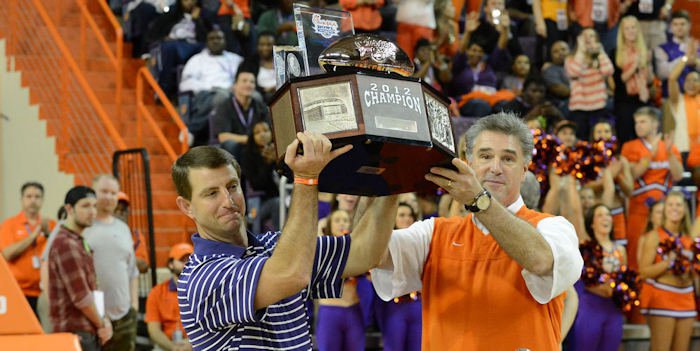 Swinney's new deal is worth $31.75 million over six years.

CLEMSON – Clemson’s Board of Trustees approved a new contract for head coach Dabo Swinney Tuesday morning, and Athletic Director Dan Radakovich told TigerNet following the meeting that it was the right thing to do.

Swinney’s six-year deal places him in the top ten nationally, and Radakovich said he didn’t hesitate when it came to getting the deal done.

“It was just the right thing to do,” Radakovich said. “Given the success we've had and where we are in the market. It was the right thing to do, and that's where we started these discussions from. We've performed incredibly well since 2014, so that's the number one reason. I think as we look at Coach Swinney and all of the things that he and his staff have done and allowed us as an organization to grow, he's an integral part of that. We wanted to make sure that we're rewarding him and keeping him at the elite level of college head football coaches in the country, and I think this contract does that.”

Radakovich said the school will do everything in its power to keep the Swinney family in Clemson, and that there are stipulations in the contract that will “tether” Swinney to Clemson should he receive interest from other schools.

“I think if he does and certainly with someone who is very good at their craft he will receive interest a lot, we have some tethers back and forth for the institution should something like that happen,” he said. “While you protect yourself that way, I know Dabo is so invested in this community. Last Friday was a great example. The foundation that he and Kathleen have had a record fundraising night and they give all of that money back into the community.

“The $55 million dollar football operations center that he's had a great hand, and his staff has had a great hand it, that's something has his fingerprints on. This is a place that I think he can stay for an awful long time and be successful. Everything that's necessary - great student-athletes within a very close range, they're here. Great fans, they're here. Great fundraising organization in IPTAY, it's here. Great coaching staff, it's here. Soon to be an incredible physical operation for the coaches and student-athletes is going to to be here. It's a great place to be.”

Talks on the new contract began once the two were able to sit down and hammer out an agreement.

“Obviously, right after the national championship game, it compressed the timetable for finishing recruiting and moving on to the next year's recruiting,” Radakovich said. “Coach was involved in that, and we worked through the assistant coaches' salaries and support staff salaries at our last board meeting. Then there were a couple of weeks where he was traveling, and I was traveling. We finally we able to get together near the end of February and into March. We came to some agreements and then the next board meeting was so close we just said instead of doing a special call, we'll just pull this together and have it done during the April board meeting. It was a good process.”

“I think really the tethers on both sides - from university to coach and from coach to the university - are there. We're making great investments in the football program right now. Certainly the football operations center is looking to be finished next year. That's a great investment on where we need to go as an athletics program for our football program. We're excited about the opportunities of things that are moving ahead, and we wanted to make sure we do it with Coach Swinney.”

Is the contract market value for a top ten coach?

“In some ways it really is. The data is out there, and you can mine it, and you morph it to your current situation at your university. Not all contracts are the same, but essentially you're looking at a market of a very few individuals who are incredibly successful at their craft, and we have one on our campus, and we want to make sure he stays here.”

How much is Dabo worth to Clemson?

“As we went through last year, there was a great sense that you guys have seen it through our social media and exposure, there's a lot of focus on Clemson right now. There is a lot of great focus on our athletic program because we had that incredible run this past fall. As we look at how important that is from a board member's perspective. It moves away from athletics. It moves into other areas of the university. There was a lot of great fundraising - non-athletic - done in Miami and in Glendale. That's one of the charges of an athletic program. We create events to showcase an institution. With our football program right now under Dabo's leadership, that's at a whole level that Clemson hasn't seen in an awfully long time, so we want to make sure we continue to move in that direction and allow the success athletically to spill out to the other parts of the institution.

“It's hard to calculate anyone's value to an organization. We just know that you look back a few years ago, and we aren't where we are today. There's been record fundraising in IPTAY. There's been record fundraising on campus. There's been a lot of focus on programs that we have. The experience that our students receive here as part of going to school is better now than it had been in the past. I don't know that you can throw it all on one individual, but certainly the leadership that he's had in our football program has contributed greatly to making that very positive.”

“That was very important to Dabo, and that's why we took it in these steps. Make sure we have the assistant coaches and the people who are surrounding him and doing great work for our football program and then we would shift our focus to him.”

Investing in the program

“Everyone grows at different rates. We now have a full grown plant, tree, Oak that we want to keep. I don't look at it that way, but I certainly understand now that I've gotten to know Coach Swinney like I have why he did it. We are fortunate to be able to utilize the resources we have right now to make sure that he is compensated fairly given the market and what he's done for Clemson University.”